‘Tis the season to give. 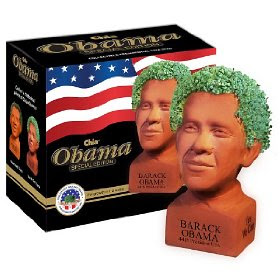 It’s too late to put this fine gift next to the Hanukkah Minorah because the seasonal holiday has passed, but, it’s not to late to order an Obama Chia Pet for your children to open. Package it, slide it next to the Kwanzaa Kinara (African version of the minorah) as your gift to the kids on the first day of your Kwanzaa festivities. 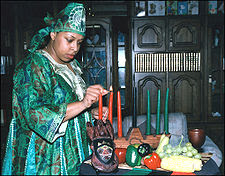 Maulana Karenga** created Kwanzaa in 1966 as an alternative to Christmas. He said that Jesus was psychotic, and that Christianity was a white religion that black people should shun. (Source: Karenga, Maulana (1967). “Religion”. In Clyde Halisi, James Mtume. The quotable Karenga. Los Angeles: University of Sankore Press. pp. 25.)

**Maulana Ron Karenga (born Ronald McKinley Everett) was a professor of Black Studies at California State University, Long Beach. He is prominently featured in the 2008 Kwanzaa documentary, The Black Candle, directed by M.K. Asante, Jr. and narrated by Maya Angelou