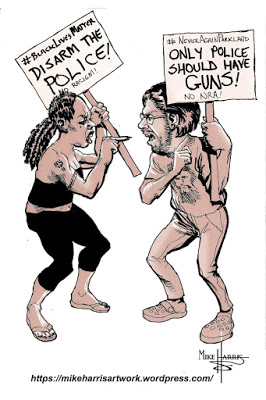 We’ve all seen her on stage. Yes, it’s a rain dance.

And if she makes it rain, does that mean that she should be president because she can (by doing that idiotic dance that she does) stop global warming and reverse climate change!! All she has to do is wait for a favorable weather report and do her pookie dance. Think about it. The progressive lemmings would run into the sea in ecstasy at the thought of President Rain Cloud Warren fixing climate change.

Should the Police carry Guns?

It’s an old argument. Black Lives Matter feel that one armed police officer is one too many. The wealthier progressive community feel that somebody out there needs to protect them from the great unwashed. And then there are the Constitutionalists who maintain that everyone who wants to carry a firearm should be able to do so, subject to the law and accountable for their conduct.

There are also the communists who feel that “only my friends should have guns.”


An Homage to Jim and Kansas
This may be the first twister forming in the history of Kansas and the Midwest. It’s due to to President Trump, global warming or climate change. But we’re all going to be dead in 10 years, so why worry? (survival kit contents check)
Kansas is cool (when the T-5 isn’t behaving like the ‘finger of God’, rooting out the just and unjust). The people are genuine. They are a bit obsessive about their BBQ though and you need to stand back when an argument on that topic is brewing. Intervening won’t help anything.
I’ve seen that first hand. Both people go to the same church, their families lived in the same town since the War of Northern Aggression and both of their great great grandads rode with Bloody Bill Anderson — but on the issue of BBQ, they disagree. And it’s not pretty. No, not in the least bit.

Yes, it happened again. Yesterday was “Talk Like a Pirate Day”. It’s the day with people whose ancestors were not pirates take it on themselves to pretend that they have some affiliation with genuine pirate people – and yes, that would be me. 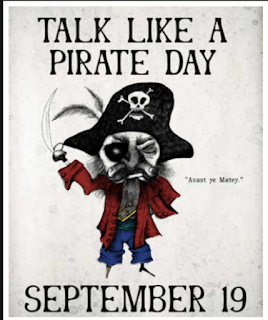 My ancestors sailed on Queen Anne’s Revenge, and now the world, particularly in the Caribbean littorals, wants to appropriate my culture.  It’s disgusting. Women dressing up like wenches and drinking too much in the hopes of being picked up by men dressed up like pirates. This has to stop. No fun is allowed until reparations have been paid as set forth below:
I demand reparations – Danegeld if you want to call it that. Once I have enough, I will back down and un-denounce you all.
In the meantime, you can excoriate your shame by starting early and sending money to this blog. You’re welcome. No Chinese Hell money or Confederate currency – real coin of the realm, or gold or silver bullion, or gold doubloons and pieces of eight. Something that nobody can appreciate quite the way that a pirate does.
P. S. – I have relatives who still won’t talk to me after I proved on paper that our ancestors were English, not Irish, and that there’s not a drop of Native American blood in us, but lots of Pirate Blood. Maybe that makes sense because I’ve been known to shout, “Surrender the Booty!” I don’t think that American Indians normally say that in quite the same way as pirates do.

WSF – Wonder who will foot the pending, very expensive, lawyer bills for Comey and company?

I don’t follow this as closely as I should, but doesn’t he have a ‘go-fund-me’ page up to pay for his woes. That may be his deputy, McAbe. He sold a lot of books, they talk about how pure and honorable he is. I’m sure that bit of honey will tide him over until he goes to prison.

LindaG – Beto will just get someone else to buy his gun for him.

His wife is worth at least half a billion dollars. They can afford to hire politically correct armed people who protect the elites. And I’m sure that it’s a defense in depth with walls.

Jim – As long as that comet’s not Lucifer’s Hammer, we’re good to go.

Maybe THAT is why the end is near. The interstellar comet will arc around the Sun and come back and hit us. I’m not predicting that in my role as ‘Cassandra’ – but we could be gone like the Dinos before next summer!

Old NFO – Re interstellar stuff, we don’t have a CLUE what is really out there. Our lens, if you will, is so small it isn’t funny.

If I need to know what’s going on out there, I read your books. (shameless plug)

LSP – You beat me to the comet! But yes, if it slows down… let’s see. In the meanwhile, the Navy’s getting close to “disclosure.” Interesting.

There is a reason why we have a big, beautiful Space Force.