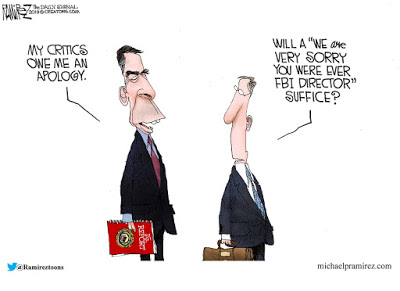 During that testimony Horowitz revealed to lawmakers that he criminally referred fired FBI Director James (Big Jim) Comey for prosecution. DOJ refused, likely because  the documents leaked by Big Jim were sensitive, but not classified. There’s a line there and I do understand it. As one of the coup plotters, Big Jim may yet get what’s coming to him. Building the case against the conspirators requires that it be air tight. Sometimes it takes longer than you hope to package the deal.

Congressman Mark Meadows (R-NC) on Wednesday asked Horowitz to investigate allegations that Comey lied during a 2017 Senate hearing because there were “numerous” times where Comey’s testimony did not match up with what was written in Horowitz’s report.

Horowitz agreed to look into the allegations, according to the Washington Times. Perjury? Maybe. A perjury conviction would make it difficult for ex-Director Comey, a proven liar, to take the stand in his own defense when it came to other matters and indictments. Treason is an ugly word, but it describes Big Jim and his FBI cronies/co-conspirators completely.
Comet from ‘Beyond-it’
Most astronomers who hunt for comets do so in specific areas, hoping to get a first glimpse (and their name on the potential planet killer) of the fuzzy visitor from the Oort Cloud. There is a certain predictability to this sort of visitor.
“A newly discovered comet has excited the astronomical community this week because it appears to have originated from outside the solar system. The official confirmation that comet C/2019 Q4 is an interstellar comet has not yet been made, but if it is interstellar, it would be only the second such object detected.” That’s because we’re widening our search parameters to areas other than those expected from local space rocks/comets.  And we’re finding things augering in from outside the Solar System, from different angles. Some of these space rocks slam into Jupiter, Saturn or the Sun, some may end up as captured moons of the big planets and most wobble a bit as they encounter the gravity of this system and keep on going – destination unknown. They’re traveling very fast — too fast to stop absent an impact.
Now if they slow down as they enter the Solar System, there is cause for concern, because the only thing that would do that is a spacecraft from ‘Beyond’.
Mail – Old Lizzy:

WSF – Lizzy? Better ankles than Shillary (yeah, totally sexist). I will give her credit for outspokenness. She isn’t afraid to put out details for her ideas. Her as President? Chills my soul.

She’s outspoken, but then again so is Irish Bob and the Butt Guy and Fidel. And some of what she proposes does make sense, but a stopped clock is right twice a day.

Jim –  She drank a beer once to proove that she’s just a regular guy. Probably washed out her mouth with white wine after she got off camera.

Yes, how wonderful to see an elitist get down and have a beer with the great unwashed. Barack did that too when he wanted to be “one of us”.

It’s amazing how they loved Trump when he was just a rich donor who wrote checks to the Donkeys and RINOs. I think that one of the most endearing things about Trump is that he speaks his mind. And he puts it on Twitter so that the world can see where he’s coming from. Imagine how much worse it would be if Old Lizzy did that. Then there’s Beto. He’s speaking his mind and confirming what we all knew. 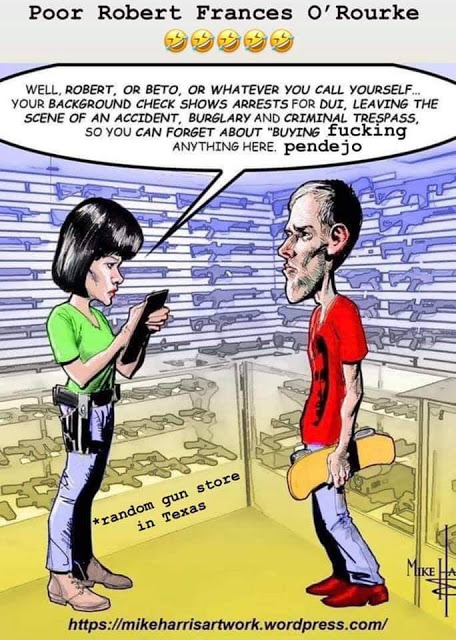 Jules confesses – Never mind busy Lizzy. I’ve got BS going on in my own street and am having JD on a nightly basis to cope with it. Forget the new “IT” cos I’ve got the franchise on clownland.

“You ain’t impressed yet! Tell me what ya wanna hear…”

Yes, as chief clown, you do enjoy a certain moral high ground and if you had been using that high ground to spy more effectively on your neighbors, you’d have known why MI-5 raided their house and hauled of them and their stuff. I swear, you could have raked in a reward, lots of old paper with HM-the-Queen’s picture on it. That’s what I want to hear. A commitment to be more diligent in your efforts as Princess of Clowns and wolf owner. I see a new residence at 10 Downing St. if you can pull it together and divine the innermost secrets of Old Blighty.

I just heard her on a news talk show promising ONLY to raise taxes on US Corporations, and she’s going to slam it to them. Maybe 90% taxation.

There are no nice words for someone her age and with her background who doesn’t understand that the corporations will pass those taxes on to the people she thinks she’s protecting. She was the head of Obama’s Consumer Financial Protection Bureau. She should understand this.

Just kidding. She was stupid then, too.

The Democrats reached out inside their big tent and selected people who will promise to demolish the Constitution, and establish a communist/socialist state (depending which of the low-IQ people on stage is talking. Lizzy appeals to a certain class of progressive because she’s a female nerd. Don’t ask me to explain why. I don’t know why they want to ban hamburgers and backyard BBQ’s.

LSP – Do you remember when we used to mock the USSR for being run by a gerontocracy? Seems like we’re fast catching up.

If elected (God forbid), Lizzy would end her term at 75. Slow Joe Biden would begin his at 77. Those intervening years were not good for Joe, who has never been that on the ball. Beto (Irish Bob) has positioned himself to be the “young Kennedy” as Vanity Fair crafted him. He was smart enough to marry a trust fund billion-heiress. I don’t know where Warren’s cash comes from. It would be interesting to scrutinize her holdings, off-shore accounts, etc. I wonder if you’d find George Soros behind Oz’s curtain, pumping up the old gal? 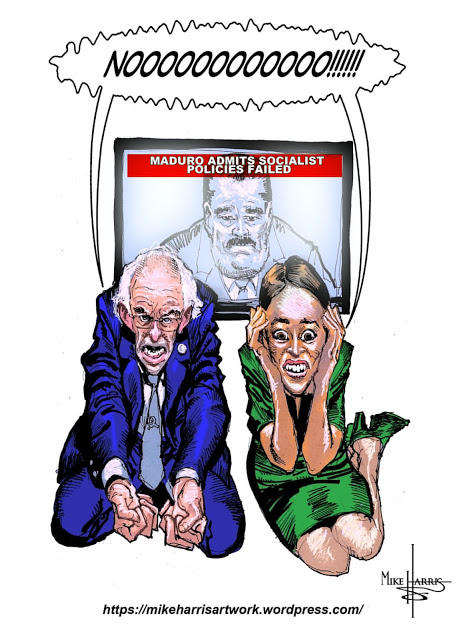