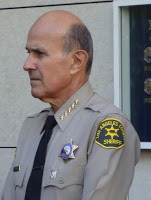 Facebook
Twitter
Pinterest
WhatsApp
Lee Baca – Behind Bars
I first became personally involved with Los Angeles County Sheriff Baca when I was the commander of the Regional Gang Enforcement Task Force. We were a multi-jurisdictional outfit comprised of federal, state, county and city law enforcement with US Attorneys and the Orange County District Attorney’s prosecutors embedded. The task force  focused primarily on Asian organized crime, though the net extended well beyond that focus. We ranged through the US and Western Canada in our efforts and met with considerable success.
As with many who encountered the Sheriff, I was like one of the blind wise men, divining the nature of the elephant through touch. Was it the tail, the slab side, the trunk of a leg, the leaf of an ear or a tusk that defined the man?
Our problem was more with his second wife, Carol Chiang. In 1999, Baca married Carol Chiang, who had immigrated to the US from Taiwan in 1979. One of our investigations found that Chiang had been acting as a “bag man,” potentially for the sheriff. She was taking “cash contributions” from Asian Organized Crime under the table. It could be argued that he never knew what his wife was up to and that quid-pro-quo activities were arranged by Chiang and subordinate (usually Chinese) sheriff’s officials without the direct knowledge and complicity of Baca.
But Baca became a wealthy man while Sheriff of Los Angeles County. And sometimes people are caught for one thing and sometimes for another if they’ve decided to ‘break bad’.

Baca, 77, who has been diagnosed with Alzheimer’s disease, had been free on bail since appealing his obstruction of justice conviction three years ago. The U.S. Supreme Court declined his final appeal last month and Baca was ordered to begin serving his term by Wednesday.

Baca was behind bars at the Federal Correctional Institution La Tuna, near El Paso, Texas, according to a federal Bureau of Prisons online database.

Ego drove him to put FIVE stars on his collar. Pride goes before the fall.

Back to Living in Tents?

Rags to riches to rags might become a reality for some of the world’s wealthiest nations. Buying protection from places like the US may be short lived as the lives of nations are measured.

DUBAI (Reuters) – The International Monetary Fund (IMF) said on Thursday Gulf Arab states — some of the world’s richest countries — could see their financial wealth depleted in the next 15 years amid lower hydrocarbon revenues if they don’t step up fiscal reforms.

The six-nation Gulf Cooperation Council (GCC) – whose net financial wealth the IMF estimates at $2 trillion – accounts for over one fifth of global oil supply, but economies in the region have been hit hard by a drop in oil prices in 2014 and 2015. 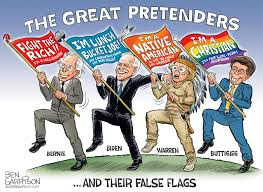 He tied with Sanders in Ohio, but(t) the Democrat party dismisses him as a fading star. Is he running to secure a vice presidential slot with one of the older guys like Sanders and Biden, who predicts his demise while in office regularly?

Or could the tepid mayor of a medium sized Indiana town, who was never able to win statewide office, now win the Democrat nomination for the Presidency?