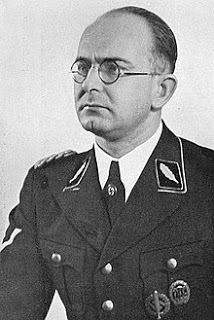 Facebook
Twitter
Pinterest
WhatsApp
The late SS-Brigadeführer (Brigadier General) Franz Six was the architect of post-war Britain’s fate. He laid it all out as part of the Nazi War Plan in 1940 when they were hopeful that the British would fold like a napkin in the face of the master race.
During the post-war interrogations in Nuremberg, he laid them out and they’re interesting. Hitler viewed all BUT the titled aristocrats in England to be racially inferior.

Those were the official SS plans. However Heinrich Himmler apparently was skeptical about the value of that slave labor. He had a different, private plan in mind that involved SS special forces simply killing about 80% of the population of England. Women would be kept as breeders to turn out a sub-race of low value workers for the Reich.
What pieces of England were left would presumably have been useful for vacationing Nazis. Beautiful scenery, castles, fox hunting.
Franz Six was convicted of war crimes at Nuremberg and served seven-and-a-half-years in prison. After that he lived 20 more years and worked as an advertising executive for Porsche, pulling down a significant salary. So it all worked out for him.