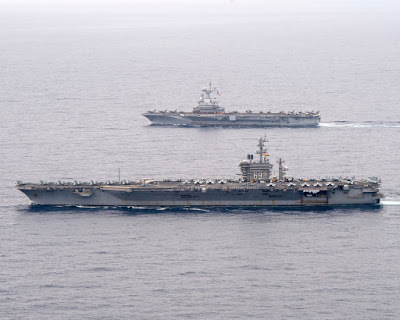 Facebook
Twitter
Pinterest
WhatsApp
A week ago today, this photo was taken of the USS Dwight D. Eisenhower (CVN 69) and the FS Charles de Gaulle (R 91) operating together in the Mediterranean Sea.
My son-in-law (the one who was 100% disabled in Afghanistan) served on the Ike. I gave him a photo of the Ike for Christmas two years ago and it’s hanging on his wall.
The Eisenhower is beginning a Middle East cruise and is scheduled to return to Norfolk, VA at the end of summer. The de Gaulle will return to Toulon, France next month.
The Charles de Gaulle is the only nuclear-powered aircraft carrier ever built outside of the USA.  As with the US, they powered it using nuclear power plants originally designed to be used by submarines. The French are big believers in nuclear power. 80% of the electric grid in France is powered by nuclear energy. They get the fuel from Africa, which explains, in part, their commitment to that blighted continent.
Russia tried to build a nuclear aircraft carrier twice. Neither attempt worked.  Power projection from Russian ports is more effectively done by submarines. They all ice up except Vladivostok and in that case, it’s hemmed in by Japan. Geography was not kind to the Russians. The place is 9 time zones long. Their dream of their own nuclear aircraft carrier was more of a vanity project.