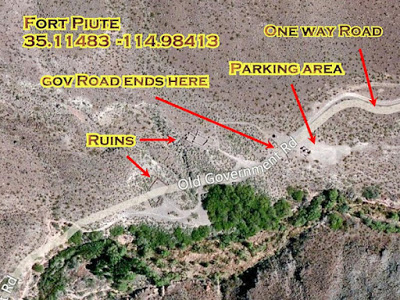 Facebook
Twitter
Pinterest
WhatsApp
There has been a lot of discussion on this blog of Olive Oatman, Hackberry, the Mojave Road, Ft. Mojave, Zzzyx and other stops along the road-less-traveled. One spot, frequently visited by Jeep clubs and the odd 4×4 out for a run is Ft. Piute, not far from the Colorado River. It was a dependent fort on Ft. Mojave (smaller garrison), but the US Army put it there to control the water. Even though the Colorado River is only about twenty miles east, the Indians liked camping here and it was occupied for a very long time.

There is a standing sweet water lake/oasis at Ft. Piute, in the middle of the desert.

In 1859.  Colonel William Hoffman and the 60 soldiers under his command stopped for water at Piute Spring, a place held sacred by the local Indians. Indians attacked, holding the high ground, and the Army made a stand. The Army claimed that they must have killed at least twenty hostiles, but the history of the Mojave tribe records that they killed two. The loss of two adult males to the Mojaves was a grievous blow. Most internecine Indian raids were designed to take property, captives and run to avoid losses of men, each of whom had to support a family.

The US Army, benefitted from a supply system and they fought differently.

Following the skirmish, orders went out and Major James H. Carleton brought the US 1st Dragoon Regiment to the site of the ambush and established Fort Beale, in honor of a Navy officer who had previously led an experimental camel caravan through the area.

The troops stationed at Fort Beale were transferred east at the start of the War of Northern Aggression. During the war, Fort Beale and block houses, redoubts and forts along the Mojave Road were manned by the California State Militia (pro-union). A lot of cattle rustling took place during those years and while the militia blamed the Indians, the Indians blamed the militia. At this point, far be it from me to assign blame.

At the conclusion of the war, the US Army upgraded the defenses along the Mojave Road (US Mail route) and Fort Beale was re-named Fort Piute. They built more permanent defensive structures and a dam for the stream that created the small lake that exists today. Desertions by soldiers, taking “the big bounce” with their kit, mounts and pay were so rampant that the fort’s life was short lived and the Army abandoned it in 1868.

I’ve seen up to about half a dozen big horn sheep, deer, coyote and bobcat in the area in the mornings and at dusk mainly.