It used to be politically incorrect for a white person to walk around in “black face”, but Rachael Dolezal broke through that glass ceiling for the rest of us. If the power elite aren’t taking you seriously and you have grievances, what better way to deal with them than to buying and using the new diversity products advertised below. Who knows, maybe you too can quit your day job and be president of your local chapter of the NAACP? 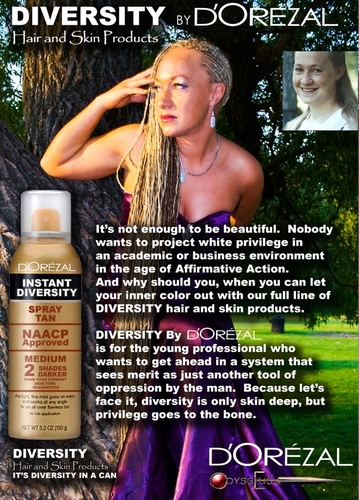 I know that this story has dominated the news and eclipsed the “real news”. We’ll pay attention to that next week, bringing you up to speed on all of the crap in North Korea and the Middle East that the news ignores anyway. 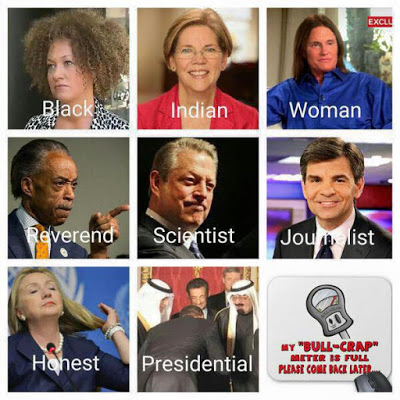 The phrase “fake it ’till you make it” has been given real legs this past month, with Hillary Clinton condemning Wall Street for being rich (unlike poor Hillary – will somebody please send her an actual crust of bread that she can gnaw on); and the NAACP spokesperson (white girl from Montana) who was only a wanna-be African American after all; and Al (Crazed Poodle) Gore, who invented the Internet and Global Weather.  It’s Halloween every day in the progressive movement.

Would I qualify for an ObamaPhone, free cheese and other perks if I simply came out of the closet and say that I’m bi-cultural since my ancestors came from Europe but I live in America now? Or do I also have to affirm allegiance to Obama-Clinton?

Team Clinton not feeling it from NBC

At the moment, the presidential election is Hillary Clinton’s to loose, and she’s unhappy with any negative comments from the fawners and the leg tinglers at NBC. You could end up on the phone all day with them if you don’t love the old reptile…

The Donald threw his cracker into the soup this week and declared that he’d rule this nation through executive action and if Congress didn’t like it, he’d brow beat them. Trump raised hackles on Fox News’ The Five.