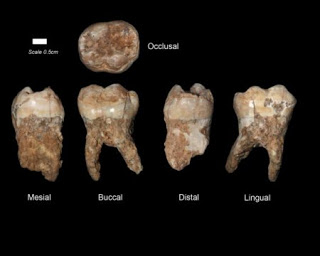 Facebook
Twitter
Pinterest
WhatsApp
It has been very politically correct to presume that modern humans emerged from the continent of Africa 200,000 years ago. Now Tel Aviv University archaeologists have uncovered evidence that Homo sapiens roamed the land now called Israel as early as 400,000 years ago — the earliest evidence for the existence of modern humans anywhere in the world.

According to researchers, the discoveries made in the Qesem Cave may overturn the theory that modern humans originated on the continent of Africa. In recent years, archaeological evidence and human skeletons found in Spain and China also undermined this proposition, but the Qesem Cave findings because of their early age is an unprecedented discovery.
The findings were discovered in the Qesem Cave, a pre-historic site located near Rosh Ha’ayin that was first excavated in 2000. Prof. Avi Gopher and Dr. Ran Barkai of Tel Aviv University’s Department of Archaeology, who run the excavations, and Prof. Israel Hershkowitz of the university’s Department of Anatomy and Anthropology and Sackler School of Medicine, together with an international team of scientists, performed a morphological analysis on eight human teeth found in the Qesem Cave.
This analysis, which included CT scans and X-rays, indicates that the size and shape of the teeth are very similar to those of modern humans. The teeth found in the Qesem Cave are very similar to other evidence of modern humans from Israel, dated to around 100,000 years ago, discovered in the Skhul Cave in the Carmel and Qafzeh Cave in the Lower Galilee near Nazareth. The results of the researchers’ findings are being published in the American Journal of Physical Anthropology.
Qesem Cave is dated to a period between 400,000 and 200,000 years ago, and archaeologists working there believe that the findings indicate significant evolution in the behavior of ancient humans. This period of time was crucial in the history of humankind from cultural and biological perspectives. The teeth that are being studied indicate that these changes are apparently related to evolutionary changes taking place at that time.

Prof. Gopher and Dr. Barkai noted that the findings related to the culture of those who dwelled in the Qesem Cave — including the systematic production of flint blades; the regular use of fire; evidence of hunting, cutting and sharing of animal meat; mining raw materials to produce flint tools from subsurface sources — reinforce the hypothesis that this was, in fact, innovative and pioneering behavior that may correspond with the appearance of modern humans.
Brushing after every meal? (apparently not)

“Human teeth of this age have never been studied before for dental calculus, and we had very low expectations because of the age of the plaque,” said Prof. Gopher. “However, our international collaborators, using a combination of methods, found many materials entrapped within the calculus. Because the cave was sealed for 200,000 years, everything, including the teeth and its calculus, were preserved exceedingly well.”
In what Prof. Barkai describes as a “time capsule,” the analysed calculus revealed three major findings: charcoal from indoor fires; evidence for the ingestion of essential plant-based dietary components; and fibers that might have been used to clean teeth or were remnants of raw materials.
“Prof. Karen Hardy published outstanding research on the dental calculus of Neanderthals from El Sidron cave in Spain, but these dated back just 40,000-50,000 years — we are talking far earlier than this,” said Prof. Barkai.
“This is the first evidence that the world’s first indoor BBQs had health-related consequences,” said Prof. Barkai. “The people who lived in Qesem not only enjoyed the benefits of fire — roasting their meat indoors — but they also had to find a way of controlling the fire — of living with it.