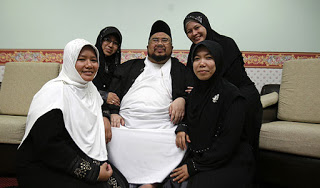 Most homosexuals, surprisingly, were at least vocally opposed to people who wished to practice polygamy (multiple marriage partners). Now that Pandora’s box has been opened, I’m sitting on the sidelines (eating from a box of popcorn), waiting for the fireworks.
The US Supreme Court has made the United States a little more Sharia-compliant with their decision in Obergefell v Hodges, and many believe that it will allow Muslims to exercise their rights under Sharia. Sharia and Islamic marital jurisprudence. In Islam, a man may take up to four wives and beyond that may take an unlimited number of concubines. At present, Muslims may move to the US with their wives from other nations, but may not officially marry more in the US. Many scholars believe that this is about to change.
Life is always full of unintended consequences, but this one was telegraphed from the start. Politico does a good job of outlining the issues.

(Politico) Welcome to the exciting new world of the slippery slope. With the Supreme Court’s landmark ruling this Friday legalizing same sex marriage in all 50 states, social liberalism has achieved one of its central goals. A right seemingly unthinkable two decades ago has now been broadly applied to a whole new class of citizens. Following on the rejection of interracial marriage bans in the 20th Century, the Supreme Court decision clearly shows that marriage should be a broadly applicable right—one that forces the government to recognize, as Friday’s decision said, a private couple’s “love, fidelity, devotion, sacrifice and family.”

The question presents itself: Where does the next advance come? The answer is going to make nearly everyone uncomfortable: Now that we’ve defined that love and devotion and family isn’t driven by gender alone, why should it be limited to just two individuals? The most natural advance next for marriage lies in legalized polygamy—yet many of the same people who pressed for marriage equality for gay couples oppose it.

This is not an abstract issue. In Chief Justice John Roberts’ dissenting opinion, he remarks, “It is striking how much of the majority’s reasoning would apply with equal force to the claim of a fundamental right to plural marriage.” As is often the case with critics of polygamy, he neglects to mention why this is a fate to be feared. Polygamy today stands as a taboo just as strong as same-sex marriage was several decades ago—it’s effectively only discussed as outdated jokes about Utah and Mormons, who banned the practice over 120 years ago.

…Conventional arguments against polygamy fall apart with even a little examination. Appeals to traditional marriage, and the notion that child rearing is the only legitimate justification of legal marriage, have now, I hope, been exposed and discarded by all progressive people. What’s left is a series of jerry-rigged arguments that reflect no coherent moral vision of what marriage is for, and which frequently function as criticisms of traditional marriage as well.

It’s not only a matter of Islamic law, but has long been a contention of religious faith within the Church of Jesus Christ of Latter-Day Saints (Mormons), as laid out in Reynolds v. United States, 98 U.S. (8 Otto.) 145 (1878).
The 1862 law forbidding polygamy and which is still on the books, stipulates a five year sentence in federal prison for practicing plural marriage. While the LDS Church stopped practicing polygamy in 1890, splinter groups still do. Given that it is legal for homosexuals to marry, is it right to imprison heterosexual multiples who wish to marry? 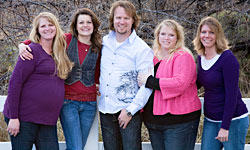 Some are famous such as the Brown Family, who are not Mormons, but were essentially forced out of Utah for practicing plural marriage and now live in Las Vegas, NV (where nobody cares) – and are featured on TLC’s television reality show, Sister Wives. In the case of the Brown family, Cody Brown is married to one wife and has three other women to whom he is not lawfully married, never the less they live together as man and wives.
Will Obergefell v Hodges extend itself de facto to polygamous and polyamorous relationships? The SCOTUS decision clearly suggests that it will. Will the White House decorate itself when the right to marry multiple partners is reaffirmed? Who knows with the Obama Regime?