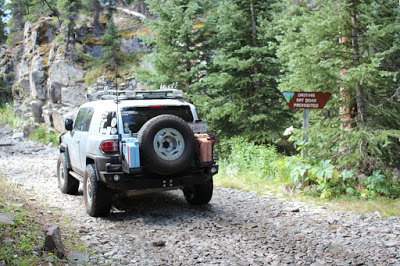 
I never want what I’m writing to turn into a polemic, but sometimes it does…almost on its own.

The only way to get to the road less traveled is to get out and travel. It sounds trite, but it’s true. I would like to tell you that I love setting up camp and sleeping in a tent, but I most often sleep in the rig. And while I am a fan of the Toyota FJ as a good 4×4 solution (when modified properly), it’s not comfortable to sleep in. 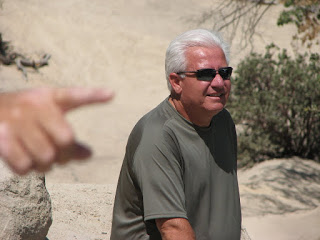 However as a minimalist camper, I don’t work as hard on personal comfort as some others do. I think that came from privations in the military which taught me that my ease was not a predicate of a successful mission. Don’t get me wrong, I like luxury as much as the next person. I just have this thing about not needing it on expedition.
In the photo (left) I’m with a guy who is trying to explain how we’re going to get up a waterfall that looks impossible. He was right, by the way. We made it. Which is to say that it’s always important to listen to somebody who knows more about a particular obstacle than you do. 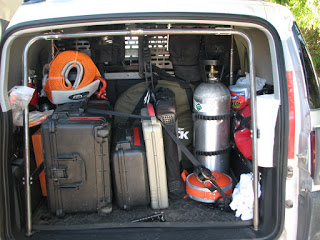 Short wheel base, high clearance 4×4’s have very little room for banal comforts, so you need to pack what you need. The basic load out is carried in a species of endoskeleton that I built and still use. I often sleep under a heavy quilt, but if I’m bringing a sleeping bag, it will go on top of the Pelican cases. If I’m accompanied, luxury items such as a tent and other accoutrements are loaded in the back seat (forward of the cage), or I strap them on the roof. Firearms are most usually carried forward of the cage so that they’re accessible. There’s not much use in having firearms that are not at hand. 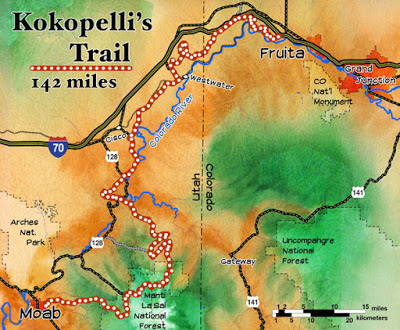 I’ve made the run down the Kokopelli Trail four times. It’s one of my very favorite expedition style runs because each time I’ve found different obstacles on the same 142 mile route. Sometimes you can ford rivers and sometimes they are running too high and you have to take a different route to overcome the problem. I was the first rig along the trail one spring and had to do a lot of road building because of wash-outs that made the trail impassible. It wasn’t out of a sense of altruism that I spent a day or two fixing roads – it’s because I needed to in order to pass.
The Kokopelli Trail is one that is best experienced with friends because it’s one of those unique trips that you can still make and it’s always an experience of discovery. I’ve done it in two days and I’ve done it in five. You are ROMPING to get through it in two days.
My first run at the Kokopelli Trail was with the Toyota Trail Teams (Factory team for the FJ Cruiser). They were kind enough to invite me along.
They ran out of fuel and ended up borrowing from me. In the West, you must always plan to bring more fuel than you think you’ll ever need. You burn more in 4 Low than you usually expect to.
I’m very much looking forward to making this trip again once I’ve settled in Arizona. (the CA house has sold and I’m in the process of moving at the moment) At present, I’m thinking of doing it Spring 2018, as soon as the snow clears and the road is passable.
Kokopelli Trail is but one of hundreds of interesting expeditions.
My son-in-law was with me on this trip to Death Valley (above) and encouraged me to pose for a shot in front of the closed brothel. There should be a rule about not being gullible enough to stand still for this sort of photo, but if there is that sort of rule, I’ve broken it too often.