Examining the ISIS Attack in Brussels 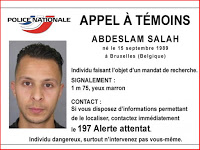 Facebook
Twitter
Pinterest
WhatsApp
The Islamic State (ISIL) claimed responsibility for the bombings in Brussels that killed more than 30 people and injured 140. ISIL claimed more than 40 people died and 210 were injured.

Another (counting up) two hundred and ten black-eye’d virgins were claimed. One American goal should be to use up all of the virgins waiting for martyrs and leave the dead military age Muslim men discontent and standing in line. Is it ‘Islamophobic’ for me to write that? Too late, I just did. In England, I’d be guilty of a crime for writing that. I’d do a lot of time in Ye Old Bailey if I lived there.

ISIS did an effective job. Their operation was well-planned and executed, and it reveals the extent of the support system that they have in place in Belgium (and France) and one can extrapolate that it’s also present throughout Europe.
Salah Abdeslam’s arrest is said to have triggered these attacks by ISIS. You remember Salah (pictured right)? He was a shot caller during the most recent attacks in Paris. In the five months since those attacks he lived with his family, in the open, in his home neighborhood in Brussels. The Belgian Police didn’t observe him because they avoid going into the Muslim neighborhoods. It takes many people and many locations to execute successfully a complex bombing attack, as occurred in Brussels and Paris. What have we learned so far?

The terrorists and their support systems are not emerging from refugee camps, as they do in Kenya or Nigeria, or from Muslim ghettos. They live in or use respectable neighborhoods. That affords them easy access to the materials for bomb making and to private vehicles. They appear respectable. The leaders and bombers seem to be naturalized citizens more often than one might expect. That is the sign of a sophisticated sleeper agent program.

The Belgians and other tolerant, liberal, generous European welfare states have often made it a crime to criticize Islam. Their security forces appear to be unaware of how deeply they have been penetrated by terrorist cells and the border-free European Union only exacerbates a serious problem. ISIS trains its people and sends in professionals to do its dirty work. Their operations are complex, well funded and well supported locally (as we’ve seen in Paris and Belgium recently).
There will be more of these attacks until somebody somewhere decides that the savages need to be dealt with harshly.

Belgium declares a day of peace and love with an outreach of understanding and caring to Muslims worldwide in response.