Events in the Third World 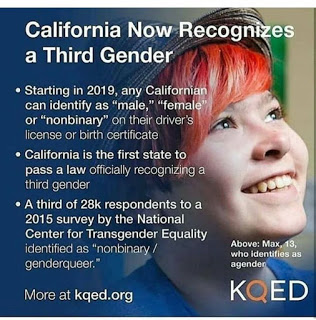 I often report on events in the Third World. I now am including California as a third world country.


Is it as wacky as North Korea?


Yes it is.
The state is $1.3 trillion in debt and they keep raising taxes, but not as fast as they fund weird stuff – like the “third gender” which they call “queer”. I have given up hope that the federal government would send in troops to secure the state capital and President Trump would dissolve the state legislature and replace the governor.
It’s one of those things like “LOCK HER UP” that has great promise, but won’t happen.
America used to do that to third world countries – primarily in Latin America, banana republics, who weren’t with the program. Why not California? The Union invaded the Southern States with an army because the Southerners weren’t doing what they wanted. What’s changed?
Kurdistan
I’ve commented on the situation that the Kurds find themselves in many times on this blog and hope to be able to continue. As with any place on the planet that is populated, there are factions. And I’m not going to discuss those factions here in any detail. Suffice that Kurdistan has divisions that disagree on policy the same way as the USA does.

Iraqi Prime Minister al-Abadi on Wednesday, 18 October, ordered the withdrawal of all armed groups in Kirkuk, including the Popular Mobilization Militias, and the handover of security to local police and counter-terrorism units only.

Keep in mind that the Shiite Muslims rule in Baghdad (with Iran calling the shots as often as not). There is a sub rosa movement that’s more than a dream but has not been realized yet to move more Shiites into Northern Iraq (Kurdistan) to allow them more ‘weight’.
Grand Ayatollah al-Sistani advised the withdrawal all armed groups to “impose security” on Kirkuk, and inducing the Kurds to withdraw.
The Turkish Armed Forces (TSK) launched a land operation in northern Iraq targeting the Kurdistan Workers’ Party (PKK), Hurriyet Daily News reported on the 18th.
The aims are to prevent PKK militants from conducting cross-border attacks, maintain border security and secure routes of passage for Turkish soldiers to military bases in Iraq.
The last time the TSK launched a land campaign in Iraq was in 2008, also to target PKK camps. A ceasefire between Turkey and the PKK collapsed in 2015, leading to an increase in violence ever since., the newspaper commented.

The Turks have been attacking PKK targets in southeastern Turkey almost continuously since the aborted coup in July 2016. Most attacks have been air strikes. Turkey claims an airstrike killed 16 PKK fighters on the 17th.
This ground force operation appears intended to kill PKK fighters who had been in Kirkuk with the Kurdish peshmerga militias, but withdrew or fled with the other Kurdish fighters. Some sources reported that hundreds of PKK fighters stiffened the Kurdish forces in Kirkuk and other cities that Kurds helped liberate from the Islamic State.
In the past, the Turkish general staff has treated parts of north Iraq as an extension of southeastern Turkey. Even regular army units were stationed in northern Iraq, with only tacit consent from Bagdad authorities. The press report indicates Turkey still has bases in Iraq.
No sources reported that Iraq approved the Turkish operation. Collective Turkish, Iraqi and Iranian hostility to Kurdish independence is probably a sufficient warrant for Turkey to send a force into northern Iraq to fight Kurds.
Opium

Yes, there is oil in greater Kurdistan and that’s a big issue for the countries in the area which have significant populations of independence minded Kurds. However, historically, the Kurdish cash crop was opium. The white powder business in Kurdistan was no less pervasive than it has been in Afghanistan and in Burma/Laos. The Kurds continue to supply Russia, the Middle East and Europe with high grade (China White) #4 Opium.

President Xi gave a report to the 19th Party Congress. His report lasted for more than three hours. He began as follows, “Comrades, I will now make a report to the congress on behalf of the 18th Central Committee.”

In his model for Chinese development, President Xi divided the time between 2012 to 2050 into three periods.

China is entering the second half of the building period in which the party has ensured food security and clothing for more than a billion people, Xi said.
The end state in 2050 is that China will be the leader of the world.
Xi used much less blunt language to describe this condition, but cumulatively, his ambition is to recreate China as the center of the international community of states and the world economy. He described China as the model for other states to follow.
Xi knows the significance of what has been accomplished. For the first time in 5,000 years, the Chinese people are moderately well-off. The achievement of food security and clothing for 1.3 billion people in a single country has no match in the history of humanity. Xi rightfully asserted that the communist party is responsible for this achievement, but also said that the tasks are not finished.

Make of all that what you will.