End of a Coot 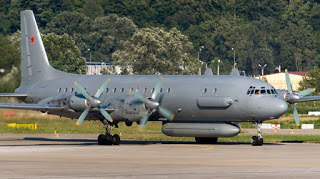 The Ilyushin 20 (Il-20) is a military version of the Il-18 passenger airplane, with electronic equipment and an array of external antennae. The platform has been used by the Russian Air Force as flying command post for the past forty-five years, with upgrades coming incrementally over that time. This version (right) is sometimes unofficially referred to as Il-20 or Coot-A NATO designation. The Il-38 Russian maritime reconnaissance and anti-submarine was also developed from the Il-18.
As currently configured for operations in Syria, the Il-20 is equipped with a wide range of antennas, infrared and optical sensors. The aircraft’s SLAR (Side-Looking Airborne Radar) and the plane’s satellite link allows the Russian military to monitor Syrian skies in real time.”

On 17 September, a Russian military Il-20 aircraft with 14 service members on board was lost during an attack by Israeli jets on targets in Latakia Province, the Russian Defense Ministry said in a statement.
Air traffic controllers at the Hmeimim Air Base “lost contact” with the aircraft on Monday evening, during the Israeli attack. The plane was 35 kilometers off the coast of Syria when it vanished.

The statement said, “The trace of the Il-20 on flight control radars disappeared during an attack by four Israeli F-16 jets on Syrian facilities in Latakia province.”

“At the same time Russian air control radar systems detected rocket launches from the French frigate Auvergne which was located in that region.”

The Israelis had no comment about the attacks in Latakia. A US source told the press that the Syrians downed the Russian aircraft as they attempted to shoot down the Israeli aircraft and the alleged French missiles.

One may deduce that the Israelis had better countermeasures to defeat the Russian-made Syrian missiles than the Russians did. Sort of embarrassing for the Russian surveillance aircraft, now resting on the bottom of the Mediterranean, waiting for a US Submarine to pick through the wreckage and bring the interesting parts back for analysis.