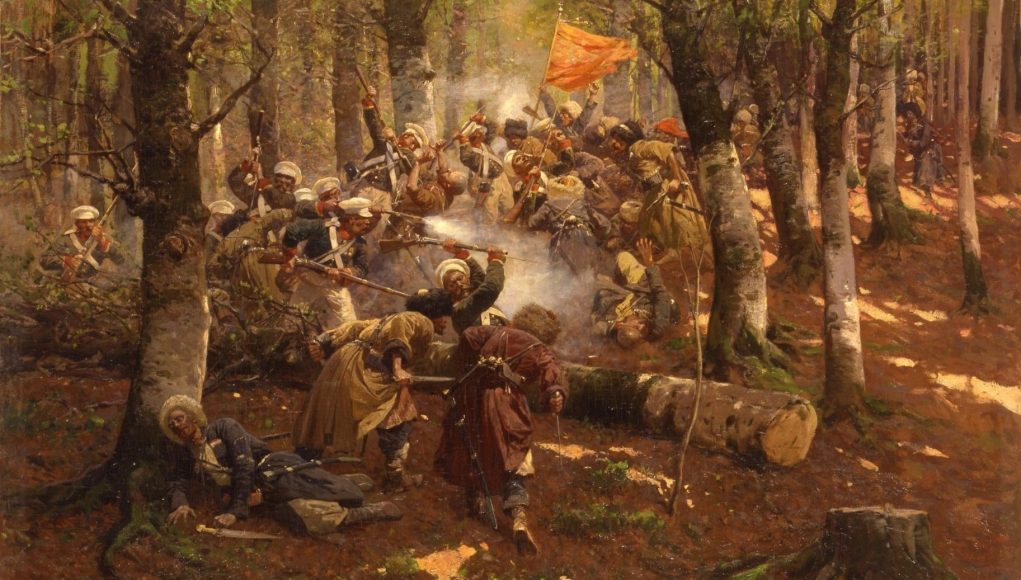 The Russian Conquest of Chechnya and Dagestan, in the later phase also known as the The Murid War, was the eastern component of the Caucasian War of 1817–1864. In the Murid War, the Russian Empire conquered the independent peoples of the eastern Ciscaucasus, but at a price.

30 May – 2 June 1842 marks the Battle of Ichkeria in the Murid War when Shoip-Molloy Tsontoroin’s 2,000 Chechens of the Caucasian Imamate defeated General Count Pavel Grabbe’s 10,000 Russians. Grabbe marched to destroy Imam Shamil’s new capital, Dargo. He led 12 infantry battalions, a sapper company, 350 Cossacks & 24 guns. The Dargo Road ran through a narrow forest path on a ridge crisscrossed by ravines & valleys. On 30 May, a skirmish occurred. Grabbe moved 7 km (4.3 mi) that day. He met little resistance. Rain that night muddied the road. 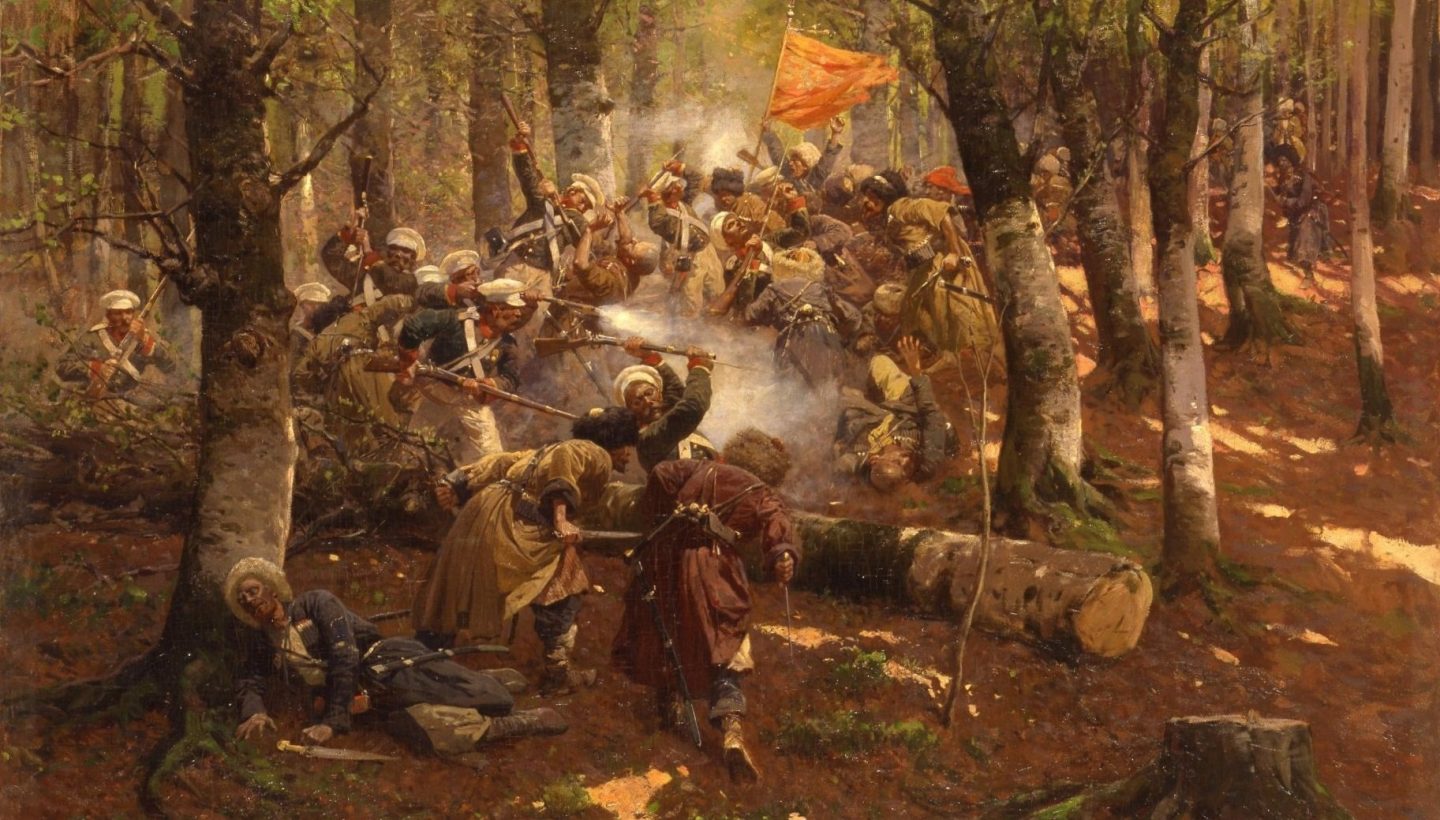 On 31 May, Tsontoroin attacked in force. He sniped Grabbe’s column’s right flank & rear from behind the ever-thickening forest. Grabbe moved only 12 km (7.5 mi) that day. He lost 72 dead/wounded. He camped on a waterless plain at Beshil-Izru.

On 1 June, he met serious opposition. The vanguard, the Kabardian Infantry’s 1st and 2nd battalions cleared at least 30 manned barricades. Tsontoroin toppled boulders onto the road. He shot at sappers clearing them away. The rearguard, the Kurintsy Infantry, was constantly attacked. The Kozhalg-Duk Ravine saw the hardest fight. It took 2.5 hours to cross. Grabbe moved 6 km that day. He lost 500 dead/wounded. He was short of water. That night, he ordered a retreat. His men were attacked all along the column. They took all night to turn around. Anything that couldn’t be saved was destroyed.

On 2 June the Chechens, seeing the retreat, attacked Grabbe’s rear in force. They rushed it with sabers & daggers. Military historian A. L. Zisserman wrote: “Each [Chechen] with a naked sword was met with grape shot, cheers & bayonets. Pushing their hats to the back of their shaved heads, or taking them off & putting them behind their belts, rolling up their sleeves, picking up the skirts of their Circassian coats so that nothing interfered with their movements, the enraged Chechens, like a wild, predatory beast, with the dexterity of a tiger, made desperate jumps, throwing themselves on a chain, or a soldier who had just moved a step away from the column, inflicting mortal blows with swords with his habitual, dexterous hand & falling in turn from the bayonet.”

Grabbe bogged down at Kazhelykovsky Ravine. It had a steep cliff on 1 side and a steep wooded slope on the other. He could barely move. The Chechens rushed a wagon train, destroyed 2 right flank companies, killed some artillery horses & carried off 6 guns. Lieutenant Colonel Wittert led 2 battalions into the forest. He retook the guns in a fierce bayonet charge. He died heroically. LC Traskin’s battalion joined the fight. The Chechens tried several times to break into the column & baggage train. Each time, Traskin repelled them. Finally, he was shot dead leading a charge.

Moritz Wagner wrote: “Lieutenant Colonel Wittert with 2 battalions returned back to the forest. With officers clutching their sabers at the head, with a shout of “Urrah!” and with bayonets at the ready, the soldiers rushed to the highlanders crowded around the captured guns. The bodily fatigue in the heat of the attack disappeared like a miracle. The brave lieutenant colonel Gam, spurring his horse, made his way to the guns. Here he died a heroic death, cut in 2 by a Chechen saber, while holding his hand on the bronze muzzle of a cannon.”

The Kabardian’s 1st and 2nd battalions now in the rearguard had lost half their men. Heat & thirst weakened them. They finally deployed across the road, determined to die bravely. Col. Kozlovsky arrived with 2 fresh companies of the 4th btn. He showered the forest with grapeshot. The Chechens fell back. Grabbe exited the ravine. He pretended to make camp. The Chechens dispersed, planning to attack again at dawn. Grabbe abandoned his heavy equipment & slipped away in the dark.

At dawn, 3 June, Tsontoroin resumed pursuit, but less fiercely. The Kurintsy’s rear battalion came under a fierce attack. The Kabardians drove the Chechens off. The road was littered with corpses of people, horses, broken wagons and abandoned charge and cartridge boxes. On 4 June, Grabbe reached Gerzel-Aul. He lost 9 officers & 480 men dead, 57 officers & 1,239 men wounded, 1-2 guns, and all his munitions & provisions. Tsontoroin lost 300 dead/wounded. After a failed raid a month later, Grabbe retired.

(zerohedge) Asserting that the next major pandemic is likely to occur within 20 years, Bill Gates said, “It could be a virus made by man, by a bioterrorist who designed it and intentionally circulated it. That is a very scary scenario because they could try to spread it in different places at once.”

“Or it could be something that makes the leap from the natural world. The human population is growing and we are invading more and more ecosystems. That is why I calculate that there is a 50% chance that we will have a pandemic of natural origin in the next 20 years, as a consequence of climate change,” he added.

The prediction that climate change will cause a virus which will then require another global vaccine rollout is somewhat convenient for Gates given that he is heavily invested in both areas.

Gates reiterated the call made in his recent book to pump billions of dollars into researching future pathogens by creating a 3,000-strong team of specialists under the control of the World Health Organization, which would require a 25% budgetary increase.

Commenting on the recent outbreak of monkeypox, Gates said “there is very little chance” it will have an impact on anything like coronavirus, although he cautioned that it could mutate into something significantly nastier.

Gates infamously warned of a coming super-virus five years before the emergence of COVID-19 during a 2015 TED talk.

Who is Running the USA?

It’s clearly not the “hollow man”, Brandon, the titular leader of the Free World. But you know that he’s going to take the hit with the public when food prices nearly double this autumn here in the USA. Heating oil and propane prices will be insanely expensive but you can survive with a thermostat set at 45. If you like your democrat you can keep your democrat (Obama). It’s convenient for whoever is in charge to keep him out there as the stalking horse.

Is the US Military Rationing Food?

(Gateway Pundit) This Memorial week we received information that the men and women on US aircraft carrier, the USS Harry Truman, are receiving food rations.  This makes no sense. The USS Harry Truman is not at war.**  It is not in harm’s way.  It is in the Mediterranean Sea near the conflict in Ukraine but not in the Black Sea. Around 5,000 personnel are on board this huge carrier.  Reports are coming out that the ship is rationing food.  Why is our military doing this?  It makes no sense.  They are only receiving two meals a day.

**There is no way to know whether we’re at war with Russia. Members of Congress individually and President Brandon have declared war on Russia, and then handlers walk it back. The handlers are clearly running the country even though they were not elected. 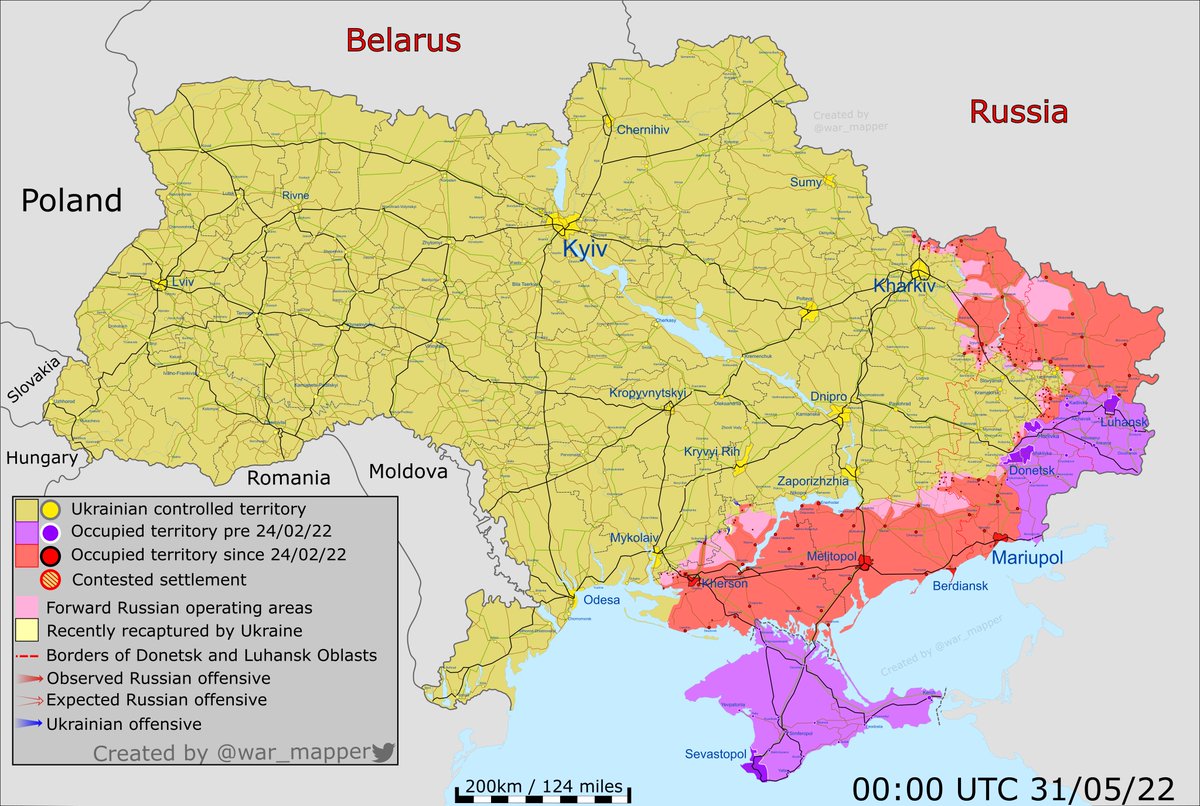 The front is essentially static with one exception. 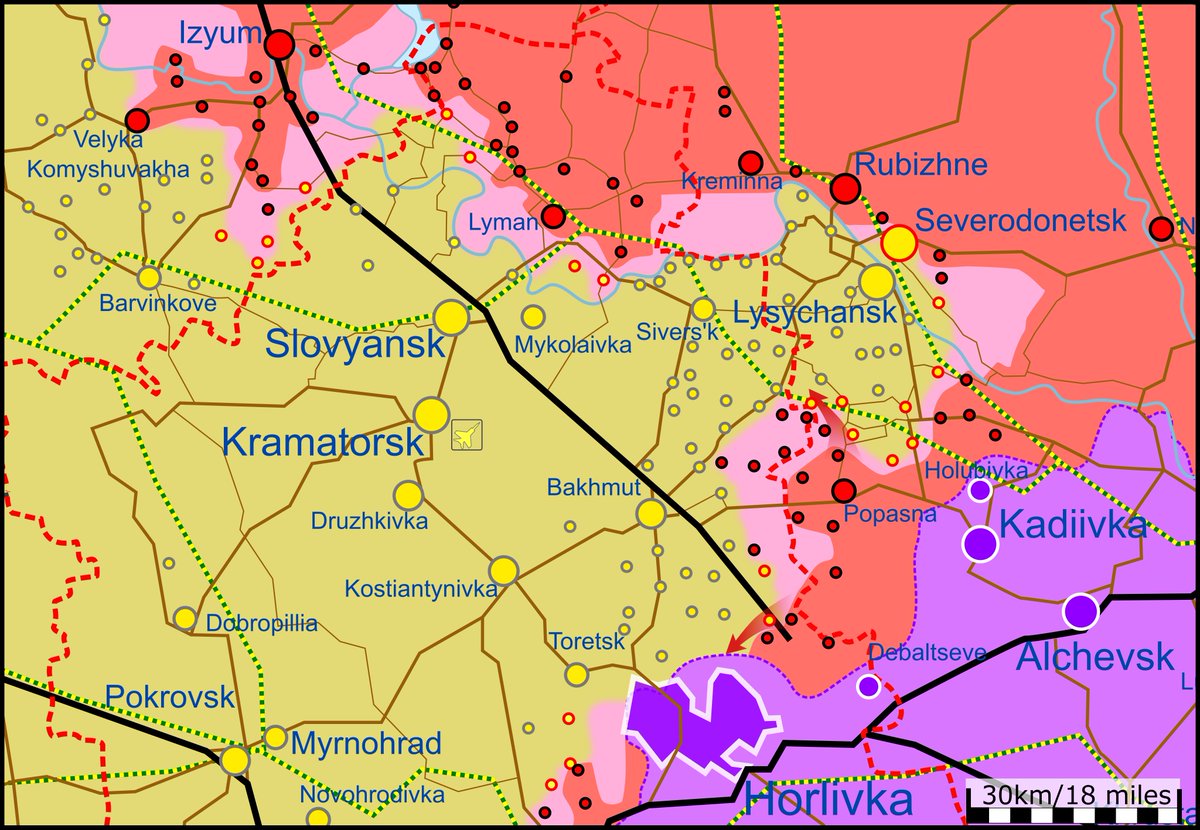 Russia resumed attacks in the area of Popasna consisting of heavy artillery fire backed up with slow infantry advancing supported by armor. They would like to close the pocket and cut off Ukraine forces and declare a victory, but they’ve been trying for a month (maximum effort) at great cost with very limited success.

The Russian push continued its progress in Severodonetsk, reaching the center of the city. Indiscriminate artillery bombardment continues in the hopes of achieving a meaningful result. 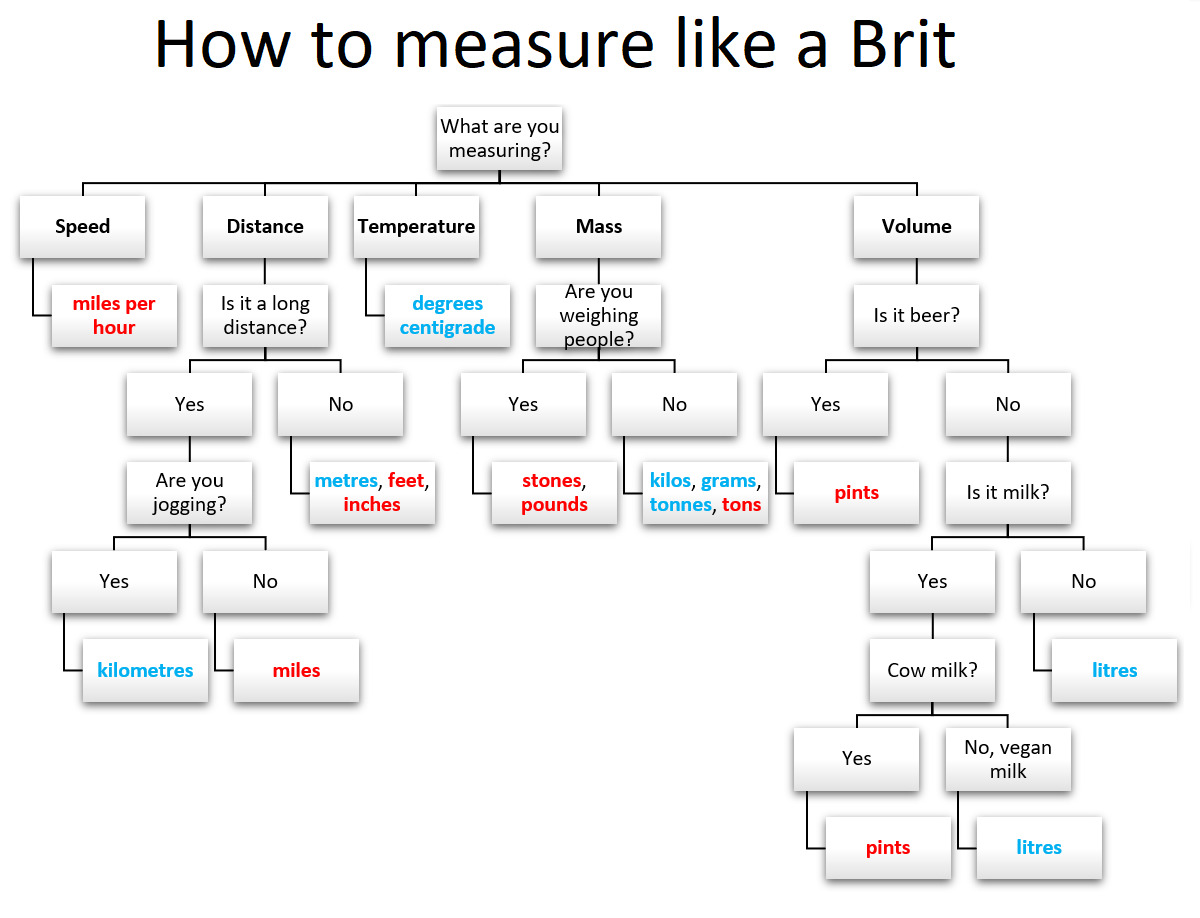