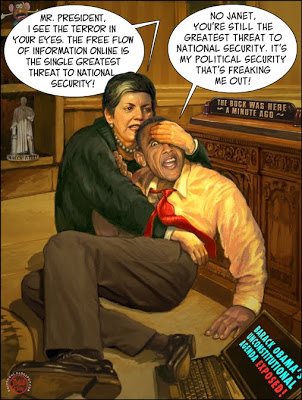 Facebook
Twitter
Pinterest
WhatsApp
When I was a kid, the dynamic duos wore capes. I refer to Batman and Robin – Superman and Supergirl – and so forth. Today it’s just a bit different as Dale captured in his graphic (below):

We harken back to whether the free flow of information on the internet is a greater threat to national security than fundamentalist Islam. Or whether the ObamaNation (more spending in the last two years than in the previous two hundred as a nation, combined) is a greater threat to America than the latest evil that the Mainstream Media discovered: The Tea Party?
Americans voted (the poor deluded unwashed masses) and returned the House of Representatives to the Republican Party in an effort to balance the books – but will Obama and his toadies in the Mainstream Media ever forgive them for doing that?