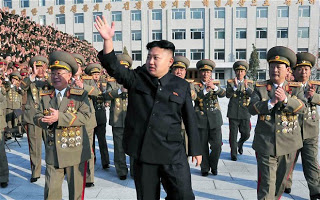 The news from the Democratic People’s Republic of Korea continues to get worse as they prepare to commit ritual suicide. I’m not sure why they are bent on this course. Maybe it has something to do with them no longer being able to feed their own people. Maybe they don’t want to keep up the Orwellian charade anymore? Maybe the presence of a few nuclear weapons buoys them up? Whatever the reason,

they seem bound and determined to end it all.

The US is playing down its preparations in public while putting the region quietly on a war footing to respond to a North Korean attack.

(IBD) The hereditary Communist dictatorship of the Kim family that took over the North with the expulsion of Japanese forces at the end of World War II has always been quirky, unpredictable and, well, mentally unbalanced by any modern governing standards. Despite the approving reports of recent celebrity tourist Dennis Rodman.

The country would be cinematically comical and worthy of a Peter Sellers role were the rogue regime not actively developing nuclear weapons and long-distance missiles to deliver or orbit them.

Few senior officials–even their first wives–get to retire in North Korea. They get dead, like Kim’s grandmother when she’d served her purpose.

Life in North Korea is very hard. The people suffer from chronic malnutrition to support one of the world’s largest armies. A single modest bag of rice can cost a month’s salary. Brutal concentration camps house an estimated 150,000 political prisoners and release no survivors. One recent visitor to Pyongyang noticed a doctor giving patients life-prolonging prescriptions, but only in three days’ doses. If they get more, she said, they sell it for food on the black market.

Best guess continues that North Korea will launch a “limited attack” on South Korea and US interests in the region (you can’t rule out Japan as well) within the next week. If either South Korea or the US retaliates, the North will engage in a ‘general war’ which will likely include nuclear weapons launches. They may not make it to the target – but the North wants to use the weapons that it’s built and it doubts US resolve despite the evidence post 9/11.

The US has reportedly moved seven B-1 Lancer heavy (nuclear) strike aircraft from Abilene, Texas to Anderson Air Force Base on Guam. They have also been reported to have deployed an E-6 Mercury (TACMO) airborne warning, command and control aircraft to Guam to support potential US operations in the area.