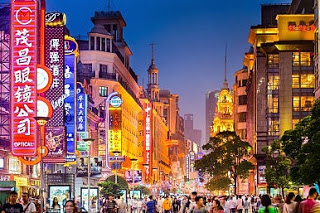 Facebook
Twitter
Pinterest
WhatsApp
Amazon-dot-com
I find it interesting that some of the books I’ve looked at on-line with the intent-to-buy are now less expensive in hard copy than they are on Kindle (buying electrons). How long before the pulp medium is dead completely?
Chinese Ambitions
This is a follow on to my comments about Chinese Kool-Aid from last Monday. China has a plan and it’s a big plan. To suck the wealth through trade from Asia, Europe and Africa back to China. This vision of the Belt Road, backed by military expansion to protect their interests is viewed by the communist leadership in Beijing as the only way to “Make China Great Again”.
They’ve gambled with the family silverware, so China cannot stop. Chinese Party leaders seem surprised by the negative reaction and blowback to the proposed amendment to the state constitution that eliminates term limits on the president and vice president. The quasi-official Global Times has featured op-ed pieces on consecutive days that defended the proposal. The Chinese sense the need to explain the proposal, but will otherwise ignore the international reaction.
The main argument is that the proposal is right for the era. It will unify the government and provide consistent long-term leadership. The fight against corruption, the challenge of long-term social reform and the development of China as a world power require strong, steady and consistent leadership.
Global Times wrote on 26 February, China’s “goal is the great rejuvenation
of the Chinese nation and a better life for the Chinese people.”

“China cannot stop and take a break. Our people believe that every year is crucial. The CPC has made development goals to be achieved in 2035 and 2050. The country must seize the day, seize the hour. Our country must be united, energetic and be able to continue with opening-up. Our country must not be disturbed by the outside world or lose our confidence as the West grows increasingly vigilant toward China.”

President Xi could become one of the elder statesmen in the world at the same time China plans to emerge as the world’s leader, after 2035.
The constitutional proposals are powerful reminders that China remains a communist, one-party state. China is not on a path towards plural democracy and never has been. Xi has rededicated the Party, with overwhelming collective support, to pristine Maoist principles of discipline, accountability and personal integrity. Xi and his leadership team are gambling China’s future to 2050 on the success of their programs and problem-solving skills. Xi said last October that China is offering its approach to development as a model for the world, more successful and equitable than free-market, pluralistic democracy.
Will “make the world China” work out?  I’ll be 94 years old in 2050, living up at the White Wolf Mine, sitting on the porch with my 45-70 lever action, surrounded by a pride of feral wolves, un-phased by Chinese ambitions – God willing. (Or I’ll be pushing up daisies.)
Imperial America
Despite all, I tend to be a libertarian at heart. No, not a supporter of the dope-smoking dupes that represent the Libertarian Party. The Swiss model of greatness tends to appeal more than trying to be the world’s policeman. I like the idea of a wall and of merit-based immigration where we suck the world’s brain trust dry by offering people who have EARNED it a better place to live. However, in order to do that we must be a better place to live and that flies in the face of the Democrat Party’s liberal agenda that is “power at any price”.
Letting China take Afghanistan makes sense to me. It’s their turn. What does the US want with Afghanistan anyway? The Greeks, Brits and Russians couldn’t do much with it. We could nuke it on our way out, but that wouldn’t change things either. Allowing Europe to rot and fall to the caliphate would be poetic justice.

The only way America or any other country can succeed is through greatness and greatness only comes with morality and the moral authority that brings. Since that doesn’t seem to be the path we’re following, I don’t think that it will work long term, and that’s the only way to really Make America Great Again.
The US has enough oil and gas to be thriving when the rest of the planet has run out. The Middle East is not a vital interest anymore. Neither is it a fun place to go on vacation (the antidote for civilization). Nobody vacations in Acapulco anymore either because it’s emblematic of the narco-run nation state – built on US addiction. We’ve flooded Mexico with cash for drugs and now they’re toying seriously with being communists. How ironic is that?
Even with a floundering Mexico, the US still enjoys stability brought by large oceans and neighbors who don’t plan to invade and capture. I think that we can survive quite nicely by forging trade deals that are in our interest and telling the rest of the planet to do whatever they want to do while we build newer and better nuclear weapons and develop fusion energy that the the Chinese will steal through industrial espionage and then sell to the world.