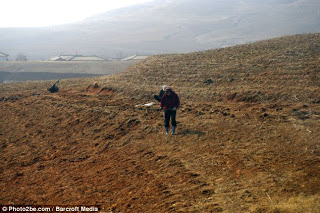 Facebook
Twitter
Pinterest
WhatsApp
In North Korea, a land continually on the brink of mass starvation, people (left) search for worms or roots to address their starvation.
Meanwhile the propaganda blares from loudspeakers in every city and in every collective farm that American imperialist aggressors and their South Korean puppets are planning to engage in a nuclear war with the peace loving people of North Korea.
You can simply reverse the rhetoric of the North Koreans and land somewhere close to the truth. Kim Jung Un’s regime is silly and it’s insane all at the same time as the preposterous gangster dynasty tries to sustain itself. Jung Un understands that the iron grip is fading despite the fact that the regime that he inherited has the people in nearly total mental enslavement. The DPRK leadership understands that once the people come to understand what’s been going on in the dark Orwellian world that they’ve occupied, that their reign is over.
To prevent his own people rising and tearing him (and his cronies) to shreds, Field Marshal Kim Jong Un, the fat little descendent of two previous dictators, is pushing the nation to war. Only by establishing a ‘credible’ external threat, can the DPRK maintain the repressive war footing that they’re on.
China, unhappy with the increasing military presence of the US on what it considers to be it’s front door, seems to be willing to put the screws to the North Koreans simply to get America to leave. The US has pledged to pull out of South Korea as soon as Korea has been unified and the nuclear threat posed by North Korea is gone.

The scariest scenario is set out by Professor Brian Myers, author of The Cleanest Race and the greatest living authority on North Korean propaganda: that pseudo-war turns into the real thing by accident: ‘We may see a thermo-nuclear war but it wouldn’t be because the North Koreans wanted it. It’s not their plan to unleash that, but it might come to that as a result of a disastrous miscalculation.’

Kim Jong Un lived in Switzerland beginning in about 1991 until about 2000. He then attended Kim Il Sung University in Pyongyang from 2002-2007 (sort of a military academy).

(Wikipedia) Later it was reported that Kim Jong-un attended the public school “Liebefeld Steinhölzli” in Köniz near Bern under the name “Pak-un” or “Un-pak” from 1998 until 2000 as the son of an employee of the Embassy of North Korea…He was described as a well-integrated and ambitious student who liked to play basketball. However, his grades and attendance rating are reported to have been poor. The ambassador of North Korea in Switzerland, Ri Tcheul, had a close relationship with him and acted as a mentor. One of Pak-un’s classmates told reporters that he had told him that he was the son of the leader of North Korea. According to some reports, Jong-un was described by classmates as a shy child who was awkward with girls, indifferent to political issues but distinguished himself in sports, and had a fascination with the American National Basketball Association and Michael Jordan. One friend claimed that he had been shown pictures of Pak-un with Kobe Bryant.

It’s been sixty eight years of living hell for the people of North Korea and now their leadership is pushing the world to fund the dictatorship and feed the starving people under threat of nuclear war. Having lived in Switzerland (in the first world), the fourth world squalor of North Korea must rub Kim Jung Un the wrong way — but he and the leadership are on the horns of a dilemma. It’s a bit like having a tiger by the tail. You are afraid to hold on but if you let go, the tiger will eat you.
Tomorrow, Kim Jung Un will celebrate his grandfather’s 101st birthday. If he launches a missile anywhere, the US/South Korea/Japan will shoot it down. Can the North Koreans live with that loss of face? Escalation will lead to general war and China will stay out of it. Which means the Kim and friends won’t last all that long.