The difference between ‘want’ and ‘need’ 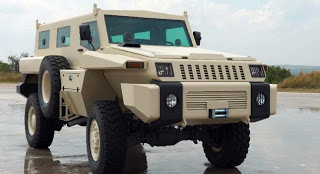 The Marauder is manufactured by the Paramount Group in the Republic of South Africa. The vehicle is an MRAP (mine-protected vehicle) and was featured in the first episode of Top Gear, Season 17. (LINK) It’s considered to be the most powerful civilian vehicle in the world and I don’t think that the claim is spurious.

Mine ProtectionMine Protection
Double anti-tank mine (14kg TNT) under any wheel. Single anti-mine (7kg) under the hull. (Higher than STANAG 4569 level 4a and 4b)#
Full Details Here
If you’re driving the mean streets of Sinaloa State, Republic of Mexico, there really isn’t anything else to compare. It will stop a .50 BMG AP round fired anywhere on the vehicle and will defend against a Russian/Chicom rocket propelled anti-tank grenade (RPG-7). So I not only want one, I think that I need one…