Did the LA Times Suddenly Grow a Conscience? 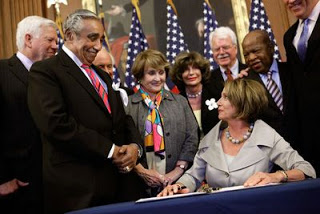 Check the link above.

For quite some time now, this blog contained comments on how the Democratic Congress has been running the US Economy onto the rocks with worthless, porkbarrel stimulus spending, pay-offs to political cronies and corrupt labor unions, etc. Now I have to do a reality check because the Los Angeles Times agrees with me.

barack hussein obama, liar, charlatan and socialist spouts recovery while he lauds ObamaCare, a government take-over that swallowed 16% of the national economy. Now a majority of Americans have called for a repeal of ObamaCare and the fool in the White House thinks he can make a few appearances, read a prepared speech or two and convince us that it’s not raining while he’s pissing down our backs.

Unemployment numbers are on the rise – with no end in view.  Businesses brace for another round of tax increases.  I heard barack hussein obama on the television explaining how he was going to pay for ObamaCare by paying small businesses to cover employees. obama isn’t paying for anything. He’s talking about borrowing MORE money from the Chinese or anyone else who will float our paper to pay for ObamaCare, which only a small minority of Americans want.

Yes, ObamaCare was popular with ILLEGAL ALIENS (obama constituents), and the chronically unemployed, and with politicians who EXEMPTED THEMSELVES FROM IT. But most Americans don’t want it. And we don’t trust barack hussein obama because he’s a liar.