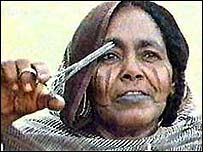 Facebook
Twitter
Pinterest
WhatsApp
(in Italy) FEMALE GENITAL MUTILATION: ITALY COMMITTED FOR UN RESOLUTION (Link to article)
(ANSAmed) – ROME – 20 August 2010 – The recent news of the death of an Egyptian girl from a genital mutilating operation can only further strengthen the Italian government’s policy of gathering consensus from as many states as possible over the coming months for a resolution at the General Assembly of the United Nations against this barbarous practice. This was stated by Italian Foreign minister Franco Frattini.
Though I know that female genital mutilation is practiced through out much of the generally uncivilized Muslim world, I struggle with the notion that it’s practiced today in civilized nations as a matter of routine. The barbarism against women in Islam is widely known. It’s simply a woman’s lot in many/most Islamic countries.

(In Great Britian) FEMALE CIRCUMCISION ON THE RISE (Link to article)

Operations are usually performed on girls aged four to 13 Health workers in the UK are worried cases of female genital mutilation – or FGM – in the UK are rising…FGM, which involves the partial or total removal of the external female genital organs for cultural reasons, has been an illegal operation in the UK for almost 20 years.
There are no government figures on how many women have been cut because it is rarely reported to those in authority. But women’s rights group forward estimates 74,000 women in Britain have undergone FGM and that 7,000 girls under the age of 16 are at risk.
>> WARNING – GRAPHIC <<


“Also, I think because we have set up a clinic here locally, by word of mouth, more and more women are coming to the clinics so our numbers are increasing quite significantly each year,” she added.

Leila was eight years old and on her first holiday abroad when her grandmother decided it was time for her to be circumcised.

“My grandma was, like, ‘Shut up, you know me – what are you screaming for, it’s for your own good at the end of the day'”

“Basically two ladies were holding my legs and they were both sat on me,” she said. “One was sitting on my chest, holding me back, holding my mouth. There were pure towels, a knife and hot water, and the lady went inside me and started proper chopping me and I was screaming. My grandma was, like, ‘Shut up, you know me – what are you screaming for, it’s for your own good at the end of the day’. It was just too much and I was in pain.” 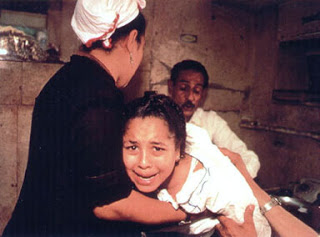 Clearly, Islam is not a civilizing influence. It seems to stress a return to the medieval as the desired norm and the human suffering that results is profound.
(h/t Infidel Bloggers Alliance)