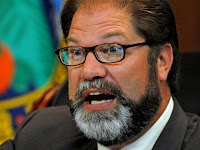 Facebook
Twitter
Pinterest
WhatsApp
A defined benefit pension plan is one in which an employer/sponsor promises a specified monthly benefit on retirement that is predetermined by a formula based on an employees’ earning history, tenure and age.

A defined contribution pension plan is one in which the formula for computing the employer and employee contribution is known but the benefit is not. It is defined by the rate of return that the investment earns in a mutual fund or other investment vehicle.

The problem that arises with state and local pension plans is that the public employee labor unions contribute heavily to the politicians who vote employee raises and pension benefits. It would be simple to eliminate the problem of run-away pension expenses.

Enact a law where no public employee or their representative can contribute either directly or indirectly to any politician who determines their salary or benefits.

However, before you get carried away with why that’s a great idea for the public, it’s not a great idea for politicians.  Your elected representatives milk those public employee unions. Remember that everything that a politician acquires by way of campaign contributions – they keep when they leave office. Therefore, the legal practice of bribery is the grease that keeps politicians rolling in clover. And they are unlikely to pass any law that effectively destroys their income. It’s not just what they are paid in salary and it’s not only what they are able to keep in the way of graft or earn as ‘honorariums’. They keep the money that the unions throw at them. The relationship is symbiotic because it benefits both the politicians and the labor unions.
Historically, defined benefit pensions tend to become a form of Ponzie scheme over time, requiring that government grow, and the contributions to the pension system to grow, in order to keep a defined benefit system paying out. The “cost” of a defined benefit plan is not easily calculated and even with the best analytic support the cost of a defined benefit plan will always be an estimate based on economic and financial assumptions. These assumptions include the average retirement age and lifespan of the employees, the returns to be earned by the pension plan’s investments, and any “raids” on pension funds by greedy government.
Defined contribution plans pay what the money earns. If the yield is better the pension is better, but its return is completely at the whim of market forces. Thus your “fixed income” could tank if the market tanked.
Run-Away Public Employee Pensions

The Association of Orange County Deputy Sheriffs contributed heavily to the election campaigns of members of the County Board of Supervisors who voted their salaries. Everything they did was legal.
Case Study: Orange County v. Association of Orange County Deputy Sheriffs (AOCDS)
The basic underlying facts of the Orange County pension case are straightforward. The Orange County Board of Supervisors approved an amended AOCDS contract in December 2001 that increased union members’ pension from a “2% at 50” formula to a “3% at 50” formula. This allowed members to receive on retirement the product of 3% of their last year’s salary, times their total number of years worked. Thus, with the stroke of a pen, the County instantly accrued approximately $100 million of additional, unfunded pension liability. This liability was based on years the union members had already worked, and they were required neither to make additional contributions nor to perform additional work in exchange for their 50% increase in pension benefits for those years.
Eight years after that was enacted, the County brought suit against AOCDS and the County Pension System because it said that prior elected officials violated provisions of the California Constitution that prohibited indebtedness. The County wanted to reduce the pensions granted under the plan that they had unanimously approved for people currently receiving pensions. In most cases people decided to retire under a set of financial circumstances that the County put in place and they relied on the good faith of the contract they had with the County.

The County lost in Superior Court, the State District Court of appeals and the California Supreme Court, spending $6 million in taxpayer dollars for an empty bag.
I’m not going into the legal details of the arguments except to cite the result (above).
What the California courts did in unison was to explain to counties that their decisions are binding, even if there may have been a technical violation of the California Constitution (which in theory would have voided the employment contract). The courts held that there was no Constitutional violation but they stretched a long way to do it. However, they acted in unison, both conservative judges/justices and liberal judges/justices.
We take away from this that once people have retired under a specific formula with a specific contract, the government can’t come back later and change the playing field. Even though it’s a California case, it is a precedent that has national implications.

Supervisor John Moorlach led the charge against the labor union and against the retired county employees. Moorlach, is believed by many who have had personal experience dealing with him to be emotionally ‘unhinged’. He’s a bright guy. I won’t take that away from him, but the common sense factor gene may be missing. And despite his continual howling about how ethical he is — I have serious questions. He now plans a run for Governor of California to further his political ambitions.
I personally feel that Mr. Moorlach “Peter Principled” out when he rose to the position of Orange County Supervisor. Instead of climbing on the backs of retired people with a political coup, Moorlach had his trousers handed to him by the courts.
Note that the Orange County Officials and Mr. Ethics, Supervisor Moorlach didn’t move to make contributions to themselves from labor unions illegal…