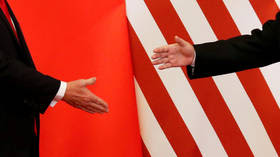 Facebook
Twitter
Pinterest
WhatsApp
CHINA TRADE DEAL  (part one)
You can read the entire 94 pages of the trade deal on the Fox News website.  There are a number of people including me, who feel that the Chinese will cheat since they’ve been doing that with every agreement that the US has signed with them. If that turns out to be the case, there will be no part two and trade sanctions will follow.
I know that some of this blog’s readers would rather get into a nuclear exchange to find out who is left standing when it comes to US/China relations. You have the right to your opinion. However, there are others (many of whom live in targeted cities on both sides of the pond) who feel differently. Having traveled to China, having dealt with the Chinese government(s) at some level, having done business with companies in China and having met with many Chinese people, I think that we can all get along.

Part of the problem with the calculus is that we’ve had crooked American politicians – Creepy old Slow Joe Biden and his criminal son, Hunter, come to mind. They take billion dollar bribes and end up selling this country down the river. You could blame China. I feel that Creepy old Vice President Joe is to blame. Of course, there are a lot of cronies and the mainstream media that will run top cover for him because they have filthy hands too.
Anyway, it’s a new world and we have a trade deal. Hopefully there is a way forward.
China’s economy has taken a lot of hits from the US under President Trump, they have a disaster in Hong Kong and Taiwan is flipping them the middle finger. They want the deal so that they have predictability. So do people in the US who do business with them.