I am old fashioned? 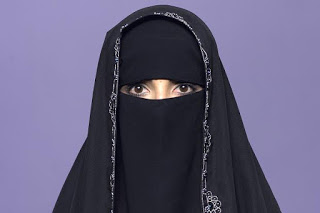 (Politico) The Supreme Court ruled Monday against the retailer Abercrombie & Fitch, 8-1, deciding that the company’s failure to accommodate a job applicant who wore a hijab violated civil rights law.

The clothing chain declined to hire Samantha Elauf in 2008 as a sales associate because her hijab violated the company’s “look policy,” which at the time prohibited employees from wearing head coverings. Elauf was never informed of the “look policy.” Elauf filed a complaint with the Equal Employment Opportunity Commission.

Abercrombie & Fitch apparently didn’t tell the Muslim that you couldn’t wear any sort of hat/headgear. That is the basis for the ruling. They have changed their internal rule now to include rags, scarfs or turbans, which should satisfy the Supreme Court for future rulings.
I want to make it clear here that I stopped using the Muslim-franchisee, Avis Rent-a-Car company in Atlanta because I was offended by the women in full tent/hijab who worked there. Part of the problem that I have is that I equate people so-dressed with enemies of my native land. I used to go to Atlanta all of the time for work.

I don’t hate Muslims and I am not fearful of them (I have a Charles Martel style attitude) but I don’t choose to do business or interact with Muslim women in hijab because it offends me. And if they don’t like me either, I am not bothered by that. To be completely fair, I’m not comfortable among the trans-gendered in drag either because I think of them as “freaks”.

I’m waiting for the day when the government forces me to go to a Muslim or tranny-owned bakery to buy a birthday cake. (normally I go to Costco to buy birthday cakes because they’re good and I’m cheap)