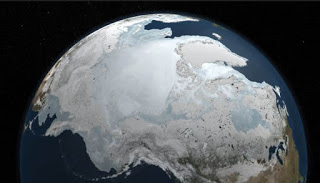 It’s at a 10,000 year high. (more HERE) Shamelessly lifted from my friend and colleague, John D.)

While progressive scientists tell you to ignore the data, suggesting that the current diminished solar activity will soon be eclipsed by global warming — it’s clearly not warming fast enough.
Liberal icons like Al Gore said that polar bears would be extinct last year – but they are thriving despite his predictions. And the polar ice grows.
There are a lot of numbers, figures, charts and graphs in the article referenced, above, there is a lesson here. More tax can not equate to weather control. At least until the progressive movement has control of the Sun…and they’re not close to doing that.
The US Coast Guard has two ocean going ice breakers (and one that operates on the Great Lakes), one more than the French Navy. The Russians have seventy, including two nuclear powered ice breakers. My sense is that the US Navy feels that submarines can project power from under the ice, and while that’s true, it’s pathetic that we only have two ice breakers, one of which was built in 1976 and was pulled out of mothballs in 2013 when it appeared that the polar ice cap would NOT dissolve anytime soon. 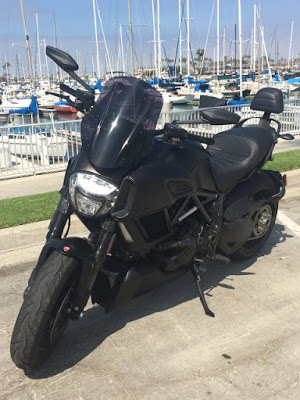 The Diavel is moving from the beach to the mountains in its trailer. It will end up being a mountain and desert Diavel and will be married to the GoPro shortly for some videos that may or may not be interesting (remains to be seen).

The speed limits on mountain roads are unrealistic for the Diavel… but there is some winding road that will be calling once the snow and ice is off the road. This machine is not designed for use with spiked snow tires.

The concept of use for this machine included ramping up into the trailer, and hauling it someplace where I’d ride it for a few hours, then go somewhere else. I realize that any hard core biker would find that sort of sissy riding to be  – disturbing at best. However, the reality of long rides (on a Harley, the Ducati, or anything else), begins to take a toll on knees, lower back and so forth. I only THINK that I’m made of steel.

On 26 December, the Russian Foreign Ministry said that Russia closely coordinated its activities with Turkey and indicated that an Astana-format ministerial meeting would be held in Moscow in the coming period.
Turkish public statements appear to be a bit confused about what comes next and when. The Turkish position was rather straightforward. The Erdogan government was determined to confront the US about the Syrian Kurds. Turkish leaders must now reexamine the options and outcomes because the Syrians and Russians appear to be moving to fill the military vacuum in northern Syria. Syria and Russia have activated a monitoring site west of Manbij.
Syria also is concerned about the security and safety of Syrian Arab Army units that remain intact in eastern Syria.
New alignments are in negotiation. Local sources also reported that the Syrian government held talks last week with the Syrian Democratic Forces (SDF) regarding the threat of a Turkish invasion east of the Euphrates. The discussions included that the SDF would hand over oil fields to the Syrian government forces in exchange for defense of the SDF-controlled areas.
The Turks and the other actors who opposed the US military presence in Syria have shown that they are totally unprepared for a US military withdrawal. The quick flurry of diplomatic and political coordination meetings is a sure sign that national positions have been disrupted and are in the process of change. So too are military cooperation arrangements.
The Israelis are not Idle
By way of a ‘Christmas present’, Israeli missiles struck targets in and around Damascus. A Syrian military official told state media an arms depot was hit, and three soldiers were injured. Syria said most of the missiles were intercepted.
An Israeli official confirmed the strikes late on the 25th and early on the 26th. He said the targets were a series of facilities involved in transferring Iranian weapons to Lebanese Hizballah.

Russian Defense Ministry spokesman Major General Igor Konashenkov said that six Israeli F-16 jets launched a “provocative” attack at the moment when two civilian airliners were preparing to land in Damascus and Beirut, creating a “direct threat” to the aircraft.

He said the Syrians did not engage their full air defense system so as to avoid hitting the civilian airliners.

This is the second Israeli attack reported in open sources since the Russians supplied the Syrians with the S-300 modern air defense system in October. The system is advertised as an anti-missile as well as an anti-aircraft defense system. Syrians insist they downed 14 of 16 missiles, but three wounded Syrian soldiers can attest that the air defense system remains porous. The Israelis said all their missiles hit their targets.
Syrians aren’t to be believed, the Israelis tend to be accurate and credible in their reporting.