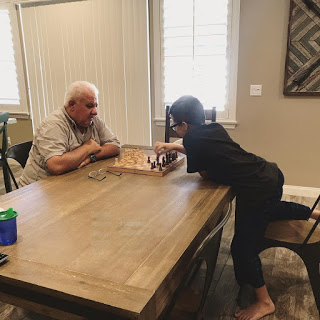 Facebook
Twitter
Pinterest
WhatsApp
It’s Christmas time and my ten year old grandson wanted to try chess moves out on me. He has a math teacher at school that he plays with, often successfully. He also beats his mother/my daughter. I told him, “I can tell in five moves if you’ll beat me or I’ll beat you.” He didn’t believe me. He made a move and I said, “I won.” After a little training, he began to get it, to understand how control of the center of the board and timely development of pieces made the game develop toward a win. Nobody ever explained chess to him in a way that would allow him to ‘see the win’.
Chess allows for other discussion of things that are the same, and not the same.

A – “It depended on the war. Generally, put ordinance on target.”

A – “Blew people up, blew things with people in them up, that sort of thing.”

Q – “Did you ever blow something up without people in it?”

A – “Sometimes.” (I thought of an oil refinery in the third world that blew up accidentally many years ago, crippling their economy – it might have been empty.)
“Sometimes I just trained people to blow things up and let them do the dirty work. Occasionally shined a laser on something that directed a very large bomb to fly there and blow it up. Other times, I simply planned to blow things up and left the details to operators in the field. Occasionally kidnapped people and brought them in alive, sometimes spoke to people that other people kidnapped. They’re called ‘direct action missions’.”
Q – “Do you play chess often.”
A – “No, not often, but I like to play. Sometimes life is a lot more like chess than people want to believe. It’s not uncommon to find that while I’m playing chess, they’re playing checkers.”
Q – “What does that mean?”
A – “I win.”
Q – “Do you ever lose at chess?”
A – “Not often. And when it comes to the Great Game, and the strength of tradecraft, losing at chess means a mouth full of dirt.”
Q – “I can see why you don’t like to lose.”
Today is my birthday.
Q – “How old are you today?”
A – I told him.
Q – “Wow that’s old.”
A – “I didn’t get to be this old by being bad at chess.”