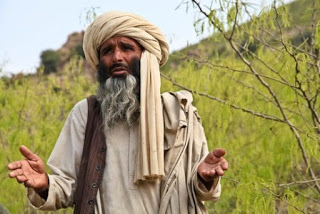 Facebook
Twitter
Pinterest
WhatsApp
DISAPPOINTMENT IN AFGHANISTAN
(re-post from the Duffle Blog)
Taliban operative and avid Navy SEAL fan Mansour Aminullah says he was disappointed when a raid on his house was conducted by “some pansies from the Ranger Regiment” instead of SEALs, sources confirmed today.

Aminullah, who has countless books and films on the elite naval special operations forces, says being raided by a bunch of guys he had never heard of was a big let down.
“The SEALs are my heroes,” said Aminullah, pointing to a poster of the iconic Trident symbol displayed prominently on his wall. “Zero Dark Thirty was just so badass, and bin Laden was a dick anyway.”
Aminullah says he prepared for the raid for months, making “welcome” signs for all of his favorite SEAL operators. At the very least, he says, he was hoping to get his copy of No Easy Day signed by someone he had seen on Fox News.
“It’s bullshit. SEALs raided my brother’s and cousin’s houses just last month,” he said. “They’re probably gonna write books about that shit. And seriously, my mother could graduate from Ranger School with a cloth over her eyes — which there is at all times — because she would be beaten otherwise.”
Soldiers who participated in the raid said they tried hard to convince Aminullah that they were just as good as SEALs and that there have been really cool movies made about Rangers, too.
“I happened to have a Black Hawk Down VHS on me, so my Rangers and I led the way into his living room to watch it and see if he would come around,” said Capt. Nick Scott, the raid force commander. “He liked Josh Hartnett’s acting, but I think we both agreed that Bradley Cooper put in more gym time for American Sniper.”
While Aminullah did not have any Army books for the Rangers to autograph, he and Scott agreed to collaborate on an upcoming article for Infantry magazine.


Congressman Calls For Army Basic Training
To Match Marine Corps Policy Of Killing Some Recruits
WASHINGTON – A Florida congressman is calling for tough reforms at Army basic training facilities so the service can match the track record of the Marine Corps, which implemented a policy of killing some recruits last year.
The move by the Corps to kill off some of the weak ones to make an example of the others elevated its 13-week boot camp to the toughest training in the nation.
Rep. Jeff Miller (R-Fla.) condemned the recent lack of newsworthy incidents taking place in Army basic training, and promised to hold the powers that be within the ranks accountable moving forward.
Miller, who serves as the Chairman of the House Committee on Veteran’s Affairs, cited the plethora of unfavorable and sometimes tragic occurrences synonymous with the Marine Corps, combined with the Army’s well-respected track record as evidence of a need for parity.
“Look, we all know the adage about ‘different uniform, same team,’” he said. “However, I’m not one to sit back and watch one branch get all the press, while the other is shoved aside. There needs to be a balance of cruelty.”
Miller said he would spearhead plans for enhanced physical and emotional torture within Army basic training. His hope is that all recruits arriving on US Army facilities will receive the proper chastisement and pummeling by mid-2017.
Miller sought the advice of Sen. John McCain (R-Ariz.) before announcing the call for change – citing the knowledge accumulated at the renowned Hanoi Hilton that makes McCain the literal go to guy for advice on maniacal savagery.
“John was telling me about meat hook suspension and gasoline being poured over open wounds. I guess it shouldn’t go that far,” he admitted. “But we’re still going to explore all avenues training.”
Miller said he feels very confident that this type of re-branding would revolutionize the Army, and catapult it to the top of many a post-high school wish list.
“I’m certain that once this thing gets rolling, our Army is going to be making so many headlines, the recruiting offices are going have hordes of eager youngsters begging to get signed up,” he said. “This is an exciting time for us all.”