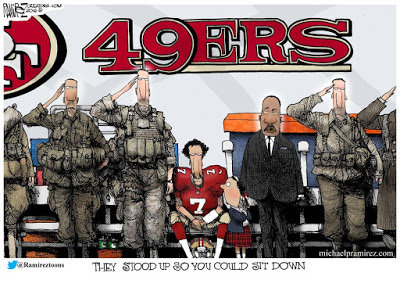 I’ve had some disagreements with friends over the NFL players disrespecting the National Anthem and the flag.
There are remedies to the grievances that the black players have. One of the first would be for the NFL to mandate 100 hours of off-season police ride-alongs for each multimillionaire football player. If you don’t like the police, walk in their shoes.
I can suggest other remedies, but the ride-along thing would vex those fabulously wealthy guys who know how to catch a football or throw a tackle. Many of them would rather be doing something else in their off-season lives (like hanging with hood rats, using illegal narcotics or banging a sweet ho). But their protest has consequences and riding shotgun in a police car is appropriate. After that 100 hours (a mere token), they might approach the problem that vexes them so thoroughly differently.
P.S. The Cowboys are no longer “America’s Team”.