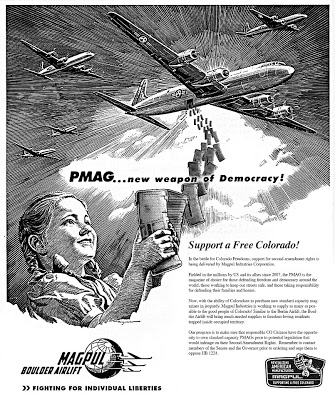 Facebook
Twitter
Pinterest
WhatsApp
What happened to Colorado?
I’ve heard that Colorado has become a living destination for urban Californians looking for a place to retire. What once was a red state is now a blue state.

Every year I spend a week or two in Colorado driving in some of the most scenic country on Earth between Montrose and Durango. I must admit to avoiding the Denver metro area and the urban slums in that part of the state (Blue State stain). I can’t imagine a situation where Colorado would proclaim itself a gun-free zone, but the drama unfolds on the evening news.

Even the Colorado hippies that I’ve met are armed to the teeth. Those dope smoking, free-love, save the planet green freaks aren’t opposed to the Bill of Rights. So what happened to Colorado to turn it?
What natural disaster broke the back of a free state?
Until recently, I encouraged my daughter and son-in-law to relocate to Durango for work so that I’d have a free place to stay when I came to visit (that’s how I roll – I also encouraged my daughter to become a commercial pilot so that I could get discount air fare — and she didn’t do either). I can no longer do that in good conscience. I would prefer that my family live in Free America where the Bill of Rights is respected. A friend of mine who lives in Colorado refers to the Denver Corridor as “Dumbfuckistan”.
Colorado legislators crow about how a pink whistle and a woman defecating on herself is now the local cure for rape. I must admit that it’s clearly a ‘progressive solution’ to a crime problem.

Colorado is clearly not the Old West anymore.
Magpul Industries, which manufactures firearms accessories and ammunition magazines, said on its Facebook page that it would have “no choice” but to leave if the magazine bill was signed, causing an opening for states eager to prove they’re more gun-friendly (such as Texas and Alaska).
In March, Colorado Gov. John Hickenlooper signed bills that would require background checks for private and online gun sales and ban ammunition magazines that hold more than 15 rounds
Magpul employs more than 200 people and generates about $85 million in annual taxable revenues, but Colorado is a rich state and it seems that they would rather not have “their kind” in the state.