The Women of VIKINGS (Series Review) 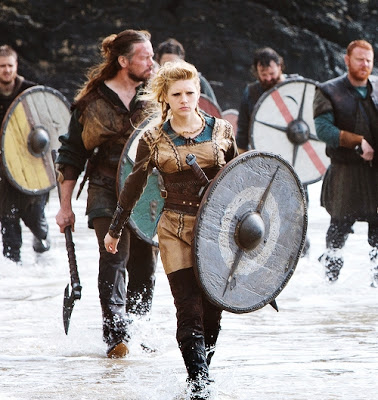 In the long anticipated first season of VIKINGS, the upstart – turned Jarl and soon to be King, Ragnar Lothbrok has two wives. The historic Ragnar had three and I expect that the third, Thora Town-Hart, will turn up as the series progresses (bearing Ragnar more sons). This is where the casting people have taken it so far. I’m not posting these actresses/series characters in this order: Jarl Ragnar’s wives and Jarl Harlson’s wife/widow. They’re all singularly beautiful women.

Katherin Winnick plays the role of the shield maiden, Lagertha, who fights along side her husband, Ragnar, in the shield wall (above) and accompanies him on raids. Lagertha is a very strong character who brooks no interference. In Ragnar’s absence, she sits as Jarl in his stead. As I watched the first season of Vikings, I can’t help but wonder at times whether or not Winnick was “playing herself” in this role.

Vikings cast two of the most beautiful women in Hollywood in the roles of Ragnar’s wives. Katherin Winnick is a very talented and aside from acting, is a licensed bodyguard. So it’s likely that it is simply the black belt in Karate and Tae Kwon Do showing through when she plays the shield maiden/warrior in the series.

We haven’t seen much of Alyssa Sutherland  yet since she just entered the scene in the season finale. We don’t know what reaction Katherin Winnick’s character Lagertha will have when Ragnar brings a new (pregnant) bride home from his visit to Gottland. However, one can anticipate that the shield maiden Lagertha will not be charitable.

Alyssa Sutherland’s career has centered on the fashion industry with forays into the movie industry with roles in The Devil Wears Prada, New Amsterdam, and Law and Order, but I’m sure she will rise to this challenge well.
Stunningly beautiful Jessalyn Gilsig (Siggy), plays the widow of Jarl Haralson. Ragnar, the central character in the series, defeated her husband (Gabriel Byrne) in single combat. Gilsig a very talented actress who built her career through the theater and in television series work like Prison Break, Glee, NYPD Blue, Nip/Tuck, Imaginary Bitches, etc. As expected, she delivers solid performance after solid performance in this television series.
As important as Katherin Winnick’s role is to the series, Jessalyn Gilsig’s contributions to its success can’t be over-stated. Her character has a tragic cast to it. Her sons were killed in distant clan skirmishes, her husband, the Jarl, recently met his demise at Ragnar’s hands and her daughter dies of the plague. It’s a tough role and Gilsig makes it look effortless.