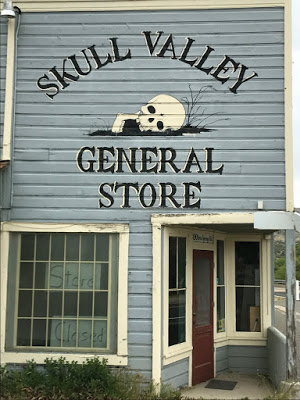 You find them everywhere in America – and particularly in Texas. They’re the little towns that grew up around the railway. Thistle Junction, Utah; Amboy, California; Searchlight, Nevada, and Skull Valley, Arizona to name a few.
When the first settlers arrived they found a lot of human remains from wars between the local Indians (Native Americans/Indigenous Peoples) bleaching in the sun, thus the name “Skull Valley” stuck.
As with most railway towns, there is a general store, a gas station, a cafe, an elementary school, an auto repair shop, a fire station, a church, and a post office. There were 525 people living in Skull Valley (at last count in 2003).
The general store was closed today because it’s Sunday, and they take the sabbath seriously there. Even the gas station (fuel and feed store) is closed. The railroad doesn’t bring income into the town as it once did. Now it’s mostly a ranching community. 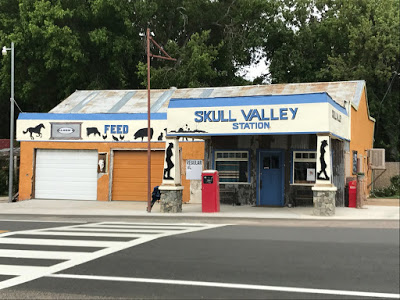 I passed quietly through Skull Valley today on my way from here to there. There were no other cars on the road, but there were quite a few cars at the church. That’s how they roll in Skull Valley – and that’s a good way to live.
A lot of old railroad towns turned into ghost towns. Others survived. Sometimes it’s only the US Post Office (still open) in these little communities that marks the presence of outlying ranches, still present behind the hills and copses of trees.
They’re an echo of an America that is still there, which provides an anchor to the basic culture that is missing in so much of society.