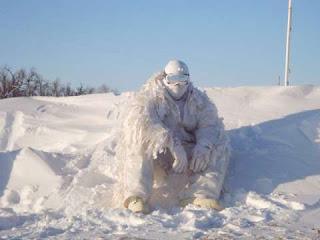 He explained that everything works differently in the snow. Everyday items such as adhesives that work in regular snow don’t work in very cold conditions.

It seemed to take a week to explore the metrics that he ticked off for successful operations in non-snowy weather including the woodcraft to pull it off, are more complex as soon as the snow falls. Even when we landed in Helsinki and took a taxi to Scandic Paasi, I thought more in terms of a ski trip. Dinner at Juuri Keittio and Baari is how it started but that’s not at all what it turned out to be, and I learned what when you eat MRE’s, constipation follows – the hard way.

In the Arctic, it’s much more difficult. When you’re north of the tree line in the tundra, it’s impossible. That’s where I found myself, laying on my belly wearing overwhites.

Overwhites are a type of coverall that you wear in situations where the world is white. Battle Dress Uniforms (BDU’s) are worthless. Between my overwhites and my flesh were down coat and trousers, long underwear, a Goretex insulating layer, trigger finger mitts with liners, a balaclava, neck gaiter, and hat. My feet were encased in vapor barrier boots, wools socks and Goretex under-socks.

If you move they can see you. If you walk or run, they can track you and since there are no trees or cover, a helicopter can just hover out there following your footprints. Good thermal gear will spot the heat differential between your energy-burning body and the surrounding ambient -30F ground. Arctic is a bitch, but so am I. To reinforce that, he leaned over, pulled back my balaclava and chewed on my ear. I didn’t know whether it was a sexual overture or to break my concentration. Knowing him, both.

It’s worse when you weigh 125 lbs soaking wet, because you have to pack over half your own weight in equipment. I didn’t understand any of this when I signed up with the outfit, and the guy laying next to me didn’t explain it. Then again, he didn’t kill me either and I was grateful for that. Less grateful in a snow suit in Finland in the winter, though.

He called it a training exercise. I called it torture. My rifle was lighter than his. He’d folded an Accuracy International Arctic Warfare Covert Rifle up inside my pack. He said that somebody nicked it from German G25 special operators. He carried an Accuracy International AX 338 with a Schmidt and Bender PM2 scope and glassed the countryside forward of us with the twenty-five power scope.


“I’m thinking of Hawaii, Jack. That condo at Ko-Olina.”

“Keep your head in the game Grace.”

Grace is not my name. He calls me that when I trip and fall. It’s an inside joke, and not one that I’m particularly fond of. Since the outfit took me on for training, Jack has been running me ragged. I didn’t think that they’d pair me up with my boyfriend but Jack explained that it worked better that way. I didn’t need to know all of the people who work for the group. We would train as a team and operate as a team.

I was laying on my back when the man with the black pantagonia ski overalls, stopped in front of our hide and staked his poles hard into the ice pack for effect. “Jack. Princess. How’s your Finland vacation coming along?”

It may sound funny, but I never thought that we were taking it to an extreme. It’s how we usually pass the morning.

“We were a little bored and had to pass the time,” Jack offered by way of excuse.

“Princess, you are supposed to piss and shit where you hide, not get up and walk twenty feet to handle nature’s call and clean up. You’re trying to be snipers, for love of pete. Jack, you were one once. I know that. What happened to Scout Sniper School discipline? Don’t answer that, I know what happened. Little Sally rottencrotch ruined you.”

“You don’t have to be abusive,” I shared with the stranger who had yet to introduce himself, but who Jack seemed to be acquainted with.

Jack looked at me with daggers, speaking to the stranger, “You’re right, Wilson.”

“The thermal bloom from your hide,” the man Jack identified as Wilson tapped night vision gear, “looked like a couple of randy mink were living in there. Come to think of it, that’s precisely what’s going on here.”

“No excuse.” Jack took the blame for me, and I loved him even more for it.

“There never is. Gather up your traps and we’ll head back. Exercise finished. I told the Center that putting the two of you together in the bush wouldn’t work…too much bush is the problem.”

I’m guessing that his rant was somewhat rhetorical.