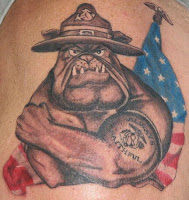 This is a fictional short, and one of a non-sequential series.
Nobody ever said that I was a good girl, but I look the part
and it works for me.
When
I first saw him, sitting next to his buddy at the table at the Balboa Bay Club,
I took his measure. Nobody would call him a good boy. Nobody would call him a
boy either.  They were both shirtless, but his
shoulders were somewhere around a yard wide and his friend was one of those
smaller men, built like weasels, wiry and nasty.  You can’t miss the scars. They’re not the
sort of marks that soft men have. The ink was all devil dog, 3rd
Battalion, 1st Marines.

I
took the shirt that he’d draped over an empty chair and put it on. Pointing to his
tattoo I said, “Balls of the Corps”. You see, I am a Marine Corps brat, and I
knew three-one’s motto. Inviting myself to his table was a far surer tactic than wasting the day being subtle and competing with the rest of the women.

They
were drinking Mai Tais, and I drank his. He ordered another one and asked my
name. I asked him if he wanted my stripper name or the name I was born with.
I’m not a stripper or a whore, though, I’ve been called the latter by men I
didn’t screw.
They
didn’t have jar head hair cuts and didn’t have the disciplined vibe and jibe of the recently discharged, so I
figured that they’d been out long enough to hang out with. He told me that his
name was Jack, and I knew that he lied to me, but it worked well enough. I knew
that I would sleep with him after the first five minutes. The next six hours
was all kabuki theater on both our parts. The love making had that hard,
intense quality, which defines the difference between fucking and intercourse.
When he went for fourths, and handcuffed me, I knew that it would be love.
He
lived in one of those high-rise luxury places across Pacific Coast Highway from
the beach, all chrome, glass and leather. When I woke up, he’d left, but since
I lounged in his place, I knew that he’d be back. I opened his best bottle of
champagne, found a box of berries and waited. While waiting, I searched the place out of curiosity.
Women leave their marks on men. Even if it’s panties left behind in a drawer or
a toothbrush in the medicine cabinet. We claim turf. There was no sign of
another woman, and Jack, or whatever his parents named him, wasn’t queer. The art was tasteful, but had an aggressive masculine quality to it. I found knives with wicked, sharp blades and loaded handguns spread around the condo in unusual places. There
are two kinds of people who do that, those who are clinically paranoid and
those who have a reason to be. Just because you’re paranoid doesn’t mean that they’re not out to get you.
Nothing
about him spoke to life as a government drone or yardbird thug. This guy definitely did not lap at the
taxpayer’s trough and his friends were all like him – definitely not ex-cons. Still, how could I help but be suspicious? He had too much money and way too much time on his hands. We
dropped the top on his Maserati and cruised the beach scene, we climbed half dome in
Yosemite and we scuba’d in the Sea of Cortez. The credit cards all belonged to
foreign banks from places like Monte Negro and Grand Cayman, all in the name of
Jack Smith.
The
hook came when we were staying in mother’s apartment and an ambulance hauled
another suicide attempt out to the local hospital. I commented that there were
a lot of them here. The wheels turned. Keep in mind that with Jack, they always
turned.  I found it attractive, and not
usually sinister, but this time, there was a darkness to his
concentration.  “Would you spill coffee
on a guy and offer to bring him home to wash his pants?”
“What?”
“Just
what I said, would you?”
“Why’s
that?”
“Because
I’m going to put a rope around his neck,” he pointed to my climbing gear, fresh from an ascent in Arizona, waiting in the corner to be washed and put away, “and
drop him off the balcony.”
I thought it was one of those sick jokes that he played on his buddies but when he actually did it, I lost my lunch right there on the floor. He liked it, said that it played well, and that the cops would like the barf too.
A drug dealer keeps my mother, and I asked him if he was in the same business. He said that he wasn’t precisely in that line of work, but close enough. I pointed out that I’d seen too much to be left behind. He replied, “who’s leaving you?”