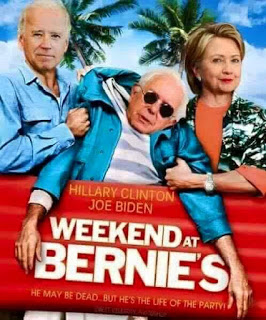 It’s interesting to see Bernie Sanders shuffle around with his wife, no evident security, pulling his little roll-aboard bag, in need of coffee and a Danish to get the motor started. The Bern is grumpy, but he’s 75 and he’s earned it.

Contrast that if you will to Hillary Clinton and a full Secret Service Detail, an army of handlers (working on her next ‘reset’), advisors, and food tasters.

I don’t think that Bernie Sanders would do a swan dive into his oatmeal without assistance and the Clinton machine is known for making that happen.

Sanders needs some sort of bullet proof clothing, loyal retainers and a food taster (there is a precedent)(Barack’s food tasters) to keep him safe since he’s now a clear and present danger to the pre-anointed Queen of America. Any Byzantine satrap would take the same precautions. Is Bernie? I don’t know. That remains to be seen. Will he make it to the convention or will he end up playing in the same harp band as Vince Foster?

Could Sanders (cold as a marble slab) still win the Democratic Party’s nomination if somebody put a voodoo hex on him – “Weekend at Bernie’s” style???

Absent Sanders, Clinton in heavy custody, who might fill the void?

After all, Hillary Clinton herself said that she ran as the third Obama term. And we known that Barack doesn’t want to leave his cushy job at the White House if he can’t be UN Secretary General or the Chief Justice of the Supreme Court.
AND ON TO TED CRUZ
Does Ted need a food taster?
This is how the headline read: Republican presidential hopeful Ben Carson on Tuesday pointedly accused Ted Cruz’s campaign of spreading false rumors during the Iowa caucuses claiming the retired neurosurgeon was suspending his bid, in a coordinated effort to seal Cruz’s victory Monday night.
Cruz apologized. But everyone knows that he’s pulled every filthy election trick that he can to puff his numbers. To me, that puts him at the bottom of my list. To the neurosurgeon, familiar with what causes the brain to work, and to make it not work…maybe Cruz needs a food taster too?