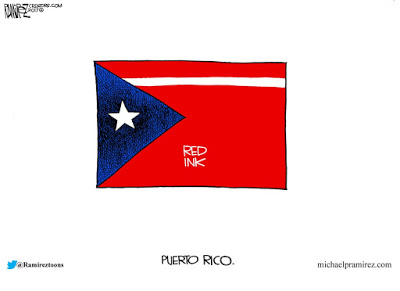 Should they leave the US Commonwealth and go it alone?
If they want to.
My sense is that Puerto Rico (a U.S. Territory) doesn’t contribute anything to the US except an unfunded liability. Puerto Rico has created an entitlement state for themselves that is balanced on the backs of US taxpayers.
It’s a blighted, entitled, crime ridden, drug sotted, welfare state and I can see no reason for it to be included as a US State until or unless that changes. It lacks Hawaii’s strategic benefit – but in a sense it’s a lot like Hawaii without the charm. Some would contend that is a racist statement, but it’s not. It’s completely objective and not the least bit subjective.
Puerto Rico has a debt to GDP ratio of about 68%. Barack signed the Puerto Rico Oversight, Management, and Economic Stability Act (PROMESA) into law and it prohibited debt collection against the Territory until May 1. When the Puerto Ricans couldn’t meet their debt, they filed for a type of bankruptcy on May 3 under the provisions of PROMESA. But they still would like to be a US State.
No! 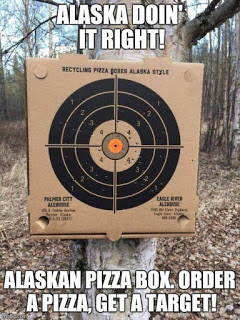 
Should all pizza boxes be changed to reflect the Alaska Rule?


Recycle the material when you’re finished with it and not before.

Will it halt global warming and save the planet?

Likely better than anything that they come up with at the Paris Accords after paying a billion dollars for good ideas.

From all reports they are, and they’re traveling to the sanctuary welfare state also known as the (Peoples) Republik of Kalifornia. At the same time, there are an unprecedented number of US Citizens leaving California (hopefully not to ‘Californicate’ the places where they land). The California state legislature couldn’t be more content. They’re trading Republicans (leaving) for illegal aliens (who vote Democrat in the no-ID voter state).
California offers significantly better welfare benefits than other states. It’s time that the homeless ALL came to California too (just as I’m leaving).

LSP calls it Satan’s Vatican and it may be. It’s also about segregation – as black students segregate themselves to hold their own negro-only graduation ceremony. (read more here)

“Black members of the class of 2017 decided to form an individual ceremony. It’s the first of its kind at the school in recent memory and took nearly a year to plan.”

Oh, can you only image the international outrage if white students decided to celebrate their uniqueness with their own white graduation ceremony (no other races need show up)? The progressive ranting and chanting would be deafening. When negroes do it – crickets. I’m not surprised that the university sanctioned it because they are a bunch of cowards, encouraging divisive and tribal behavior rather than requiring everyone who matriculated together, graduate together at the same time.

Director James Comey is no longer running the FBI. It’s about time. 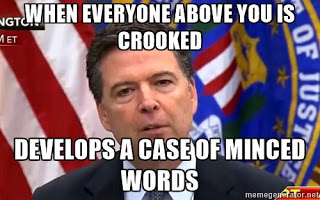 I think that Asst. Director McCabe whose wife received $700K in funds from Clinton friend(s) while he was running the criminal investigation of Hillary Clinton will follow Comey into private life. They did not serve the Bureau or the nation in a time of crisis in a way that was appropriate in my opinion. In my humble (not THAT humble) opinion, there need to be some cultural changes at the FBI so that this doesn’t happen again.

Let the memes begin. Will Director Comey be remembered as kindly as Harambe the Gorilla was? I doubt it.