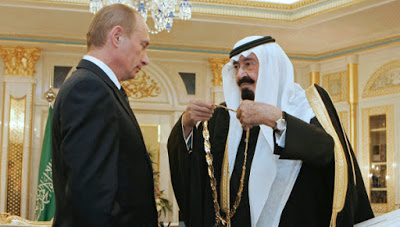 Facebook
Twitter
Pinterest
WhatsApp
The Saudi government is searching for new allies and military relationships to re-balance the former close relationship that they had with the US. US Middle East policy is confusing at best, even to your humble correspondent, who follows these matters as an avocation.  The Saudis have a State-client relationship with some Al Qaeda factions simply because the enemy of my enemy is my friend – and Al Qaeda in Syria is taking hits from both the Iranians and ISIS. This creates friction with the US.

It’s much easier for the Saudis to maneuver diplomatically because there is a king and the buck stops there. The Americans, valuable allies when they keep their word, have rotating administrations and Congressional orientations that make them “flakey”. Russia is what Putin says that it is. He’s a king in his own right.

The Saudis also have a tripartite treaty of sorts between themselves, Egypt and Israel  as they find allies of convenience to try and keep the Iranians from moving further against them. Enter the Russians, in search of new friends and hard cash for weapons systems and nuclear technology.
On 18 June, the Saudi press reported that Saudi Arabia’s Deputy Crown Prince Mohammed bin Salman signed six agreements with Russia including one on the peaceful use of nuclear technology.  I expect that they’re going to be buying centrifuges and yellow cake so that they can match Iran in the production of ‘peaceful’ nuclear material for the power plant that they ‘so desperately need’. I don’t know that the nuclear development laboratory has already been constructed hundreds of feet below the sand, but I expect that if it hasn’t, they’re excavating to throw it in now.

America, no longer the honest broker of peace and the ultimate defense by promise of nuclear destruction, has told everyone on the planet that they need their own nuclear arsenal if they can afford to buy or build one. Thanks Barack and Hillary for your Arab Spring.

Deputy Crown Prince Mohammed bin Salman met with Russian President Putin at the Konstantin Palace in St. Petersburg on Thursday after arriving in Moscow late Wednesday on an official visit.
Deputy Crown Prince Mohammed bin Salman also is the Minister of Defense. The Russians showed him displays of military equipment on the sidelines of an international economic forum in St. Petersburg.
Saudi Arabia is the second Sunni Muslim country that Russia has hosted in the past two weeks. Putin also met Turkish President Erdogan in Baku last week. These Russian moves hint at a change in Russian policy by which Russia ensures it has relations with Iran and Syria as well as the Sunni states and movements that oppose the Syrian government, should they prevail.
Russia seems less committed to the government in Damascus than before. I think they’ve admitted that Syria will be a battleground for years to come and while it’s nice to be able to park your Mediterranean fleet there, nobody knows when they may have to pack up and leave.
Where is America in all this? Where indeed. Secretary of State Kerry is still courting Iran, trying to hammer out a treaty for the sake of Barack’s legacy, that the US Senate will never approve.