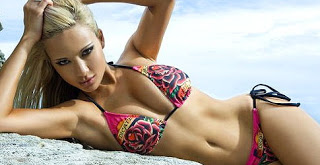 Simone Starr (alias Simone Farrow and half a dozen other names, the most recent being Simone Lawson) posted AUS$150,000 bail and then ran for it. FHM Magazine, which I have never read, apparently voted her, ‘the sexiest woman in the world’ for the past three years.
How did she come up with the bail? (I heard you ask the question) Her attorney, an aging Sydney barrister named Anthony Renshaw posted $50k of it. The rest was posted by Dr. Joseph Grech, celebrity physician who has “known her since she was 15 years old” (LINK). One can only speculate what Simone did to earn their trust.
Please don’t accuse me of having a dirty mind because I only report the facts and let your Rule 5 minds decide the rest.
What did this young rising star do to earn the animus of the Australian Federal Police? She ran a methamphetamine ring, distributing pounds of crystal meth throughout Australia.
Her statement – 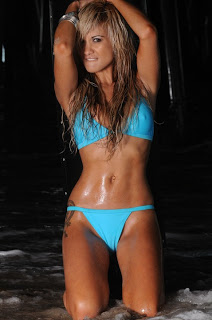 “Australian and former Ed Hardy swimwear model told the paper that she had been in relationships with “numerous underworld figures or whatever you want to call them,” and that “maybe they feel threatened by my situation.” She added she “will bring (details) to light during the next couple of weeks.” (LINK)

So, to bring this to a synopsis, she’s going to rat on the mafia who put her in the business and kept her in the lap of luxury. Simone is a rat?
Oh, say it isn’t so!