Brownie Points in the Worker’s Paradise 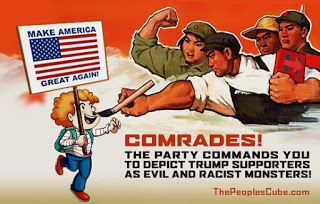 Facebook
Twitter
Pinterest
WhatsApp
I have joked in the past on how people need to do odd and disgusting things to receive points from progressives. The points have no cash value, of course, but it makes you more of a prog. China has taken this to heart and has created a social credit system which will be in place by 2020. If you think of it in terms of brownie points, it makes more sense.

I know that this big brother move will appeal to the Maoists in Congress. Stand by.
The national government will reward or punish citizens based on their scores. Simply reading this blog would, for example, crash your social credit scores. The Chinese explain that it’s a lot like a financial credit score, except that you are watched and scored based on your political correctness. As you rise in social standing, you’re not held to the same standard that other people are. For example, if you’re the child of a Politburo member, there are different rules for you – as you’d expect. Apparatchiki get special treatment and forgiveness for blunders.

The “social credit system,” first announced in 2014, aims to reinforce the idea that “keeping trust is glorious and breaking trust is disgraceful,” according to a government document.

The exact methodology is a secret — but examples of infractions include bad driving, smoking in non-smoking zones, buying too many video games and criticizing the national government.
Punishments include:
Banning you from travel on public transportation. No airplane ride, or train ride for you.

Throttling down your internet speeds.
According to Foreign Policy, credit systems monitor whether people pay bills on time, much like financial credit trackers — but also ascribe a moral dimension. If you miss a bill, you’re bad, loss of points. Is there an appeal? No. The government is not wrong.
Banning you or your family members from attending good schools.

In July, a Chinese university denied an incoming student his spot because the student’s father had a bad social credit score.

Denying good jobs.
Getting you into or keeping you out of good hotels.

An unidentified woman in Beijing also told the BBC in 2015 that she was able to book a hotel without having to pay a cash deposit because she had a good score.

Getting your dog taken away.

The eastern Chinese city of Jinan started enforcing a social credit system for dog owners in 2017, whereby pet owners get points deducted if the dog is walked without a leash or causes public disturbances.

Those who lost all their points had their dogs confiscated and had to take a test on regulations required for pet ownership.

Naming and shaming A  2016 government notice encourages companies to consult the blacklist before hiring people or giving them contracts.

A prototype blacklist already exists, and has been used to punish people.