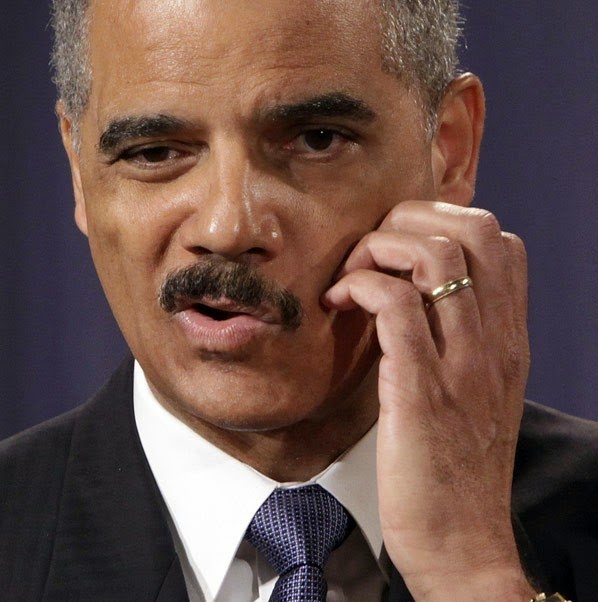 Attorney General Eric Holder needs to put on a police uniform, pin a badge to his chest and show police in Fergusson, Missouri, The Bronx and Watts (LA) how its done. I want that pencil neck geek to man up and DEMONSTRATE to the nation how he would handle a questionable situation which requires quick thinking and demands action.
We all know that will never happen. Holder is nothing but a cheap hack with the right skin color and the right friends to be Barack Obama’s factotum and Attorney General. 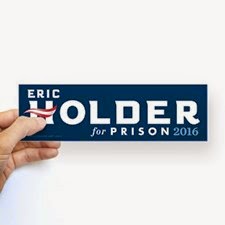 Wait a minute — if Eric Holder had been a law enforcement officer who lied under oath to Congress (as he did as it pertains to the Fast and Furious Scandal), he would have been FIRED.
Ok, put that lawyer in a uniform anyway. Attorney General Eric Holder has ordered the retraining of police in several major departments across the country to combat what he calls pervasive racism in law enforcement.
Earlier this year, more than 120 Seattle police officers filed a lawsuit against Holder, arguing that his retraining program has created “hesitation and paralysis” among officers, stripping them of their right to make reasonable, split-second decisions in the line of duty to protect themselves.
The suit, now on appeal after a Clinton-appointed judge tossed it, alleges that officers have turned in Tasers in large numbers because of confusion about how and when to use them. They’re also reluctant to respond to backup calls out of fear of being disciplined by federal monitors.
A simpler solution would be to train black people not to kill other black people – thus requiring the police to respond. 96% of all black men who are murdered in America are murdered by other black men. The primary cause of death for black men under 50 in the inner city is murder — by other black men.
New York City, needs an ACLU Legal Emergency Sharpton Squad (ACLUELESS) made up of ACLU members, attorneys and Al Sharpton. Whenever police encounter the need to subdue a drug crazed and possibly armed criminal, they simply call upon an ACLULESS member to subdue and handcuff the criminal. In this way, the criminal’s dignity is preserved and the Obama/Holder team is satisfied.
People who live in fly-over country who senselessly cling to God and guns have another solution for inner city thugs, thieves and looters who leave their liberal havens and branch out to other as yet untouched victims a bit further afield. It doesn’t require the intervention of the police or of AG Holder.
It may be better for inner city looters, thugs and members of the New Black Panther Party if they remain in the inner cities.