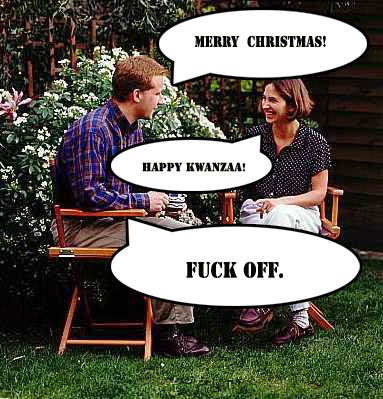 December 26 is Boxing Day to some, a birthday to others, but in the inner city, it begins the celebration of Kwanzaa.

There are two kinds of people in America. Those who celebrate Kwanzaa and racists…

Kwanzaa begins December 26 and runs through the week, ending on New Year’s Day. It’s best celebrated while sitting on porch furniture in the inner city, eating a full bucket of KFC, drinking malt liquor, shoplifted from an inner city convenience store and shooting out street lights that the city just installed to try and reduce street thuggery. Maybe steal a car and go for a joy ride, torching the car at the conclusion of your celebration. Normally these cars are stolen from other Kwanzaa celebrants who are “race traitors”.

(Race Traitor Defined: Inner city people who actually have jobs and inner city fathers who have elected to raise their children, trying to pull themselves out of poverty)

Kwanzaa was the brain child of Ronald Everett, a devout Marxist and American African revolutionary. Ronald is his ‘slave name’ (he since took the name Maulana Karenga), a professor at the California State University, Long Beach (chairman of African Studies). Karenga has a checkered past involving torturing a young black woman, that ended him in state prison.


Here are the roots of Kwanzaa — just like Christmas, right? — just another day in the ghetto. Ronald Everett (Maulana Karenga) said,

“People think it’s African, but it’s not,” Karenga said about his holiday in an interview quoted in the Washington Post. “I came up with Kwanzaa because black people in this country wouldn’t celebrate it if they knew it was American. Also, I put it around Christmas because I knew that’s when a lot of bloods would be partying.”