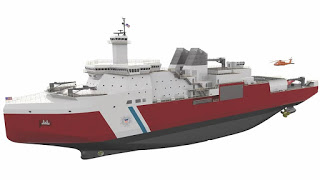 …is that the polar caps are melting as the Earth warms. Yet Congress authorized three new heavy ice breakers for the US Coast Guard (more here).
It seems to me that those are ships without a mission unless we stop driving cars and kill all of the cows now.
Congress needs to decide what it believes in.  Conventional progressive wisdom holds that by 2024 (when the first of the ships will be launched), there won’t be any polar ice remaining…even though the polar ice cap has been growing in size and thickness over the past few years. Maybe they know more about the coming ice age than they’re letting on?
Russia built and launched14 icebreakers for various arms of the country’s government just since 2013. China has also been building additional icebreakers and is now in the process of building a 30,000-ton displacement nuclear-powered design. It seems that they don’t believe in the spew from the Paris Climate Accords either.