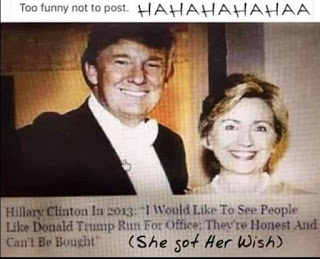 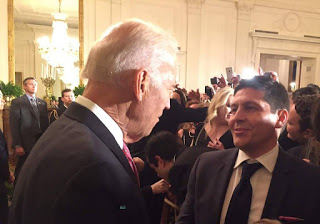 Anyone who has to deal with government needs to deal with both sides of the aisle. The defense contractors (Beltway Bandits) have it down to an art. Here’s a photo of one of my business partners with Sleepy Joe Biden.
Our fellow blogger, Fredd, predicts that Slow Joe will end up being the Democrat nominee because he’s the least radical of the bunch. Fredd may be right because the hysteria among progs has become deafening. Every single day they double down on stupid with another bout of insane crap, trying to demonstrate HOW left they can go.
Common Sense and Student Loans
The message should be, “don’t take out a loan that you can’t afford.” I knew a guy in grad school who lived on student loans for seven or eight years, limping along, taking the minimum number of classes. It was his ‘income’. Today he lives in China and hasn’t attempted to pay a dime back. The thought that we should all band together (including people who paid off their student loans) to cover people who foolishly took out more student debt than their liberal arts degree would ever be able earn them (makin’ bacon at the Waffle House)  makes sense only to people who want a free ride…and political parasites who want a vote.