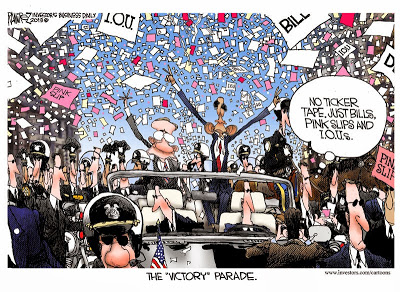 The Democratic Party made a conscious decision before Franklin Roosevelt to offer Bread and Circus, or “The New Deal” to the masses and use American’s own money to buy their votes. The process was refined with Lyndon Johnson’s “Great Society” — and the projects that were built in the 1960’s at public expense became high rise slums as inner city people from sprawling slums were concentrated in the high rise units. Enter Jimmy Carter, a horrible president who performed so badly, that the Republicans came back for 12 years, defeated the Soviet Union and brought prosperity (and apathy) back to the nation. The Republican economy buoyed up the Clinton Years, and Bill Clinton tried bread and circus but his heart wasn’t really in it because he turned welfare into “workfare”.
George Bush wasn’t a bad president, but he was saddled with a recession at the same time as 9/11 went down and he kicked the economic can down the road, propelled by Dodd-Frank, which wrecked the economy eventually. He couldn’t attack Saudi Arabia – and influential Saudis were at the core of the 9/11 attack, and America wanted vengeance so we attacked Afghanistan because we needed to attack somebody. Then he went a ‘bridge too far’ and attacked Iraq — because he could, not because he should. Thus ushering in a more refined era of bread and circus, featuring the Chicago political machine (no strangers at buying votes). 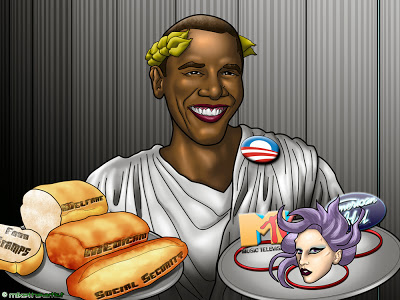 The fall of Rome is laid at a number of causations, but bread and circus is clearly one factor. The complacent Romans wanted the conquered lands to bear the brunt of buying votes back home and Julius Caesar broke the back of the republic by offering them himself as dictator. This began the reign of the Caesars.
Roughly 50 million Americans receive food stamps (bread). Circus is provided by the mainstream media’s propaganda campaign (which replaced the news) and mindless popular shows such as “dancing with the stars” and “singing competitions”. How else can you look at it? 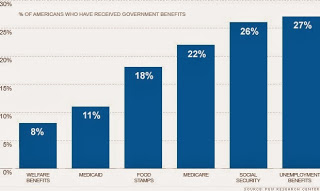 “Free Healthcare” will collapse the best health insurance system in the world as the motivation to provide quality diminishes and government rules and regulations inundate and destroy private enterprise that sought market share based on quality. But everyone likes “free” because somebody else is paying for it.
Barack Obama, the first Post American president is not to blame. The American people are to blame. And they’re going to get what’s coming to them. Or they can begin a course correction in 2014.
The mainstream media will remain loyal trumpets of lies and misrepresentations, and the bread will flow above all else…