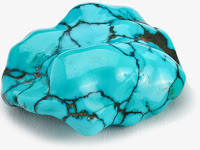 I am not a rock hound, however I must confess a personal interest in finding turquoise. The Apache in Arizona held that the blue stones were precious.
There are places in Arizona where I found turquoise in the past so I went there. I didn’t find the stones, but I reflected on the history of the region, which was also a reason for my trip to the area. The heat of early summer can be daunting, but it serves to remind all present of the struggle that is present in the Sonoran Desert…the balance of life and the presence of abundant animal life even in the presence of adversity. 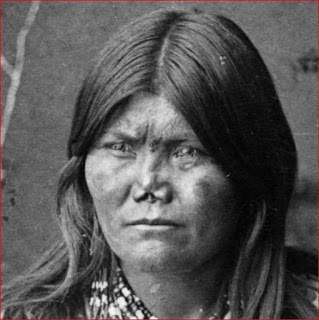 Adversity and conflict resulted from the clash of cultures – when machine-age Europeans came into contact with Indians in the Southwest (as elsewhere).

Nal-Tzuch-chi or Nal-Tzuci-ei-ah (right) was a spy for General George Crook, in the course of his campaign in Mexico in 1883, against the Chiricahua Apache.

His nose was cut off. The “dirty nose” mutilation was used to indicate people who were unfaithful in marriage.
Field campaigns by any military force in history were carried out based on practical considerations for a number of things, most of which had very little to do with martial splendor. Uniforms that worked well on the parade ground or in set piece battles such as those encountered regularly in the War of Northern Aggression/Civil War, were not necessary in the West. It was easy to tell the difference between a white man and an Indian. 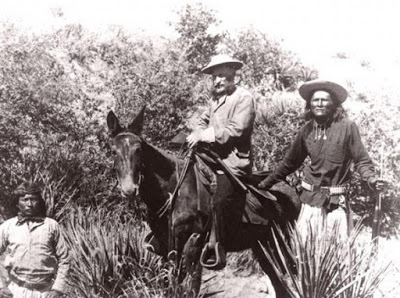 General George Crook*, veteran of the War Between the States, the Crazy Horse Campaign (where Custer’s 7th Cavalry Rgmt. was thrashed), and the Geronimo Campaign.
While in the field in the West (including the campaign against the Souix), General Crook rode a mule and wore a brown tweed suit. Pictured left, he favored a sun helmet in hot weather. Usually he carried a shotgun for point defense work.
In this photo, he’s mounted, next to Sergeant William Alchemy, an army scout.

* George Crook (1830-1890) graduated near the bottom of his class at West Point in 1852.  Crook saw duty during the Civil War at Second Manassas [Second Bull Run], Chichamauga, and in the Shenandoah Valley, including Cedar Creek.

In 1871 Crook was assigned to the Department of Arizona. He was transferred to the northern plains in 1875. In 1882, Crook was reassigned to command the Department of  Arizona  once again, where he engaged in the search for Geronimo until 1886. He was relieved of command and replaced by General Nelson A. Miles, who believed that the only good Indian was a dead one. For the remainder of his military career, Crook, fought for the release of Apache scouts who had faithfully served under him in Arizona and were rewarded for their efforts by bing imprisoned in Fort Marion (now Castillo de San Marcos) in St. Augustine, Florida or in Fort Pickens, Pensacola, Florida.

After being relieved of command in Arizona, Crook served as Commander of the Department of the Platte until 1888 when he was given command of the Department of the Missouri where he served until his death in 1890. Upon learning of Crook’s death, Red Cloud, Makhpiya-Luta (1822-1909), said: “Crook never lied to us. His words gave the people hope. He died. Their hope died again.” 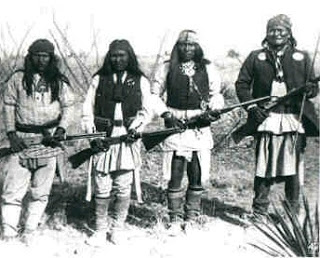 Geronimo, stands on the right, and some Apache warriors. Notice their high leather boots made of soft leather. They would roll the soft leather tops up past their knees to protect them from cactus and thorny brush when they needed to. Or they could be rolled down to cool off. Often they would store small items in the rolled up part.

Look at the wide cloth headbands. These are another Apache trademark. Almost all the men wore them. They would absorb sweat and keep it from trickling down into the eyes. The headbands are also thick to absorb the heat of the hot sun in their desert environment. The short skirt or breechcloth is another standard piece of clothing for Apache men. They are wearing European style shirts and maybe pants too. They probably got these from traders. This is what Apache men wore after 300 years of contact with the Europeans. Their coats, belts, vests, and guns are all European and not Indian. The blue coat of a dead soldier also made for an appropriate trophy…but it would get you killed or mutilated if the army caught you wearing it.

When in the desert, it’s often a good idea to emulate the general practices of the Apache, or you’ll end up with cactus thorns in your feet, ankles and legs. You’ll also note that the Apache carried firearms. That’s not politically correct in America today, but it’s (still) not a bad idea to have a firearm and a good knife with you when you’re out there. Sling the M-4 and the canteen, wear canvas trousers that deflect thorns and snake fangs and wear stout boots because the cactus thorns will penetrate gucci footwear with devastating effect.