Beheadings and assassinations in general can be tricky business. Part of the game requires that the one chopping the heads off with the machete, escape…to chop another day. 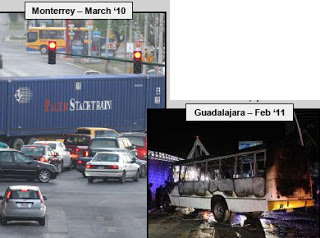 When you are on your Mexican vacation (the antidote for civilization), you may find that the traffic where you are has ground to a halt. Don’t worry, it may simply be another one of those pesky “narcobloqueos”, as they say in Mexico. It’s important for the cartels to prevent access to first responders who might disrupt their plans. Narcoterrorists steal cars from motorists at gunpoint and use those cars – trucks, or busses to bar access to their escape routes.

If you’re on a tour bus, don’t feel that put out if it’s boarded by masked armed men who demand you to hand over your valuables before they douse the seat you were just sitting on with gasoline and then torch the bus. That’s simply how it works these days in Bloody Mexico.
Blockades are both cost effective (since narcoterrorists use stolen vehicles) and they work. I wonder how long it will take for this strategy to catch on in the United States? Oh, don’t worry. It can’t happen here, the US Department of Homeland Security is on the job. Those are the same folks you see at the airport looking out for your welfare.

Did the mainstream media report any of this? Do you hear about it in the evening news or read about it in your newspapers? Isn’t it frigging pathetic that you have to read about it on a blog?
Is the President of the United States doing ANYTHING beyond the ‘for show only’ measures to secure our Southern Border? I know that the liberal media and the Obama regime doesn’t seem to take any of this seriously, but we do put hundreds of millions of dollars into fighting wars ten thousand miles away — to keep us safe.
What about the Mexican Border?
Oh, that’s right, all those people down there are potentially high propensity Democratic Party voters! Now I get it!!