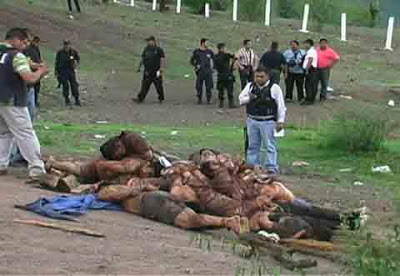 The recent disclosure covered by the Los Angeles Times, of 28 more corpses unearthed bringing the mass grave total to 145– with more coming up every day, was augmented by the arrest of sixteen San Fernando City municipal police officers by the Federal Attorney General (PGR).  This brings the arrest total of police officers to twenty-three in recent days.
It seems that if you dial 911 in Tamaulipas, Mexico, you get a cartel associate who shows up to your door. Complain about the police failing to protect you or your property from organized crime, and POP, you’re the next carcass in the mass grave.
This is shocking to me because I understood that most of the victims who were disappearing in Mexico were either dumped in lime pits for their remains to ‘vanish’ or dropped into the Ammonia tanks in the Ammonia factory in Culiacan. Then again, these are Los Zetas who are handling the body count with mass graves. They have never been that subtle.
Additionally within the past 30 days: 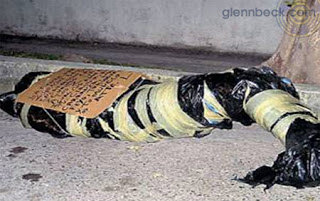 And through it all, the Obama Administration’s Bureau of Alcohol Tobacco and Firearms continued to supply guns to these cartels through Operation GUNRUNNER. Two guns involved in the operation were found at the scene of a shootout in southern Arizona in December in which U.S. Customs and Border Protection officer Brian Terry was killed, prompting at least three inquiries on Capitol Hill.
Why isn’t Border Protection a top priority of the Obama Administration? No more lip service Mr. Obama. We need to protect the nation from the potential Democratic Party voting block that’s crossing the border.