The Fall and Rise of French Seapower 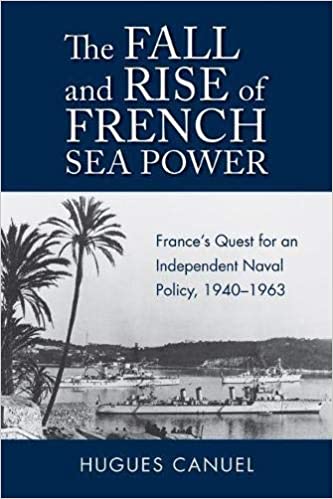 This blog’s readership understands that seapower is one focus of Virtual Mirage, and that praise is dolled out along with criticism when it is due. The book being reviewed, “The Fall and Rise of French Seapower: France’s Quest for an Independent Naval Policy 1940-1963”, by Hugues Canuel, published by the US Naval Institute Press, begins with the Second World War and ends in the Fifth Republic.

The Fall and Rise of French Sea Power explores the renewal of French naval power from the fall of France in 1940 through the first two decades of the Cold War. The Marine national continued fighting after the Armistice, a service divided against itself. The destruction of French sea power at the hands of the Allies, the Axis, and fratricidal confrontations in the colonies continued unabated until the scuttling of the Vichy fleet in 1942.

Twenty years later, Charles de Gaulle announced a plan to complement the country’s nuclear deterrent with a force of nuclear-powered, ballistic missile-carrying submarines. Completing the rebuilding effort that followed the nadir in Toulon, this force provided the means to make the Marine national a fully-fledged blue-water navy again, ready to face the complex circumstances of the Cold War.

Hugues Canuel demonstrated that the renaissance of French sea power was shaped by a naval policy formulated within a strategy of alliance closely adapted to the needs of a continental state with worldwide interests. By doing so, the reader has cause for reflection on 2021, where the same thing is happening. It’s not in the book, but that’s one reason this book is important. History repeats and by understanding the situation in the Fifth Republic, we can better comprehend what we see today.