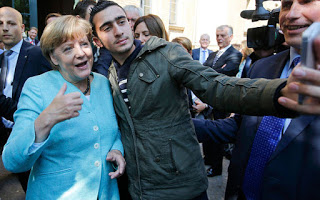 I’m afraid that we wiped out the common sense gene in the German population through saturation bombing during World War 2. (The Blaze) “The head of Germany’s domestic intelligence agency said in an interview published Sunday that security officials had misjudged the Islamic State group’s ambition to sneak terrorists into Germany under the guise of asylum seekers.”

A trained chimp could have worked out that cause and effect. Continuing the commentary on the cited article in The Blaze, “I am concerned that we (the BfV) and our partner agencies may, in fact, have information about dangerous individuals saved in our databases. However, we might fail to notice that they are here because they enter with false identities.” You think? They need to clone a few of the old SS types just to run the idea past them — or ask the average 5th Grader. The result would be the same.
The million-plus military age males fleeing (leaving their women and children behind for the most part) need to be sent back to the Middle East or Africa and told to fix the problem at home.  If Europe wants them, that’s fine, I guess. They can embrace the plague. We don’t need it in the US.
Meanwhile in Bulgaria, the military is training to repel the hoards of Muslims fleeing north.  Normally the Bulgarians are not lauded as being smarter than average by other Europeans. The Bulgarians, Hungarians, Poles and even the Norwegians (who many thought had the viking bred out of them) are standing up to the million Muslim march. 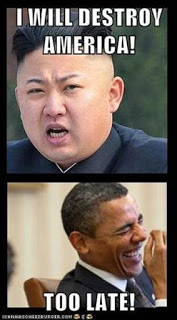 The peace-loving communist dictatorship, Democratic People’s Republic of Korea, is scrambling now to make friends since the Chinese cut them off from coal, food and war materials. China is the DPRK’s only trading partner and even they have become tired of their neighbors to the south. Even though it wasn’t carried on the mainstream media, the Norks shot a test missile up to the Chinese Border about two weeks ago. The Chinese said, “enough,” and now there is no food flowing south to prop up the dictatorship. Over the last two days, the North Koreans have been making peace overtures to both the Chinese and the US.

There were indications that they planned to test yet another nuclear weapon within the month but that test may be on hold until they can get the food and fuel supply going from China again. Their spring military drills are set to end within the month, and the standard threatened invasion of South Korea stopped somewhat suddenly. The worker’s paradise is almost always starving (with the exception of Dear Leader Kim Jong Un, who at 5-9, 310 lbs, just gets fatter) but this Chinese move will lead to them going back to eating tree bark, which is the standard move when there is no other food available. (no, I’m not exaggerating)