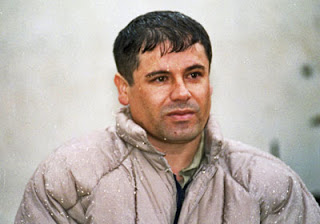 Forbes Magazine says that he’s the sixtieth most powerful man in the world and the 937th richest man on the planet…which is to say that he’s rich, but not as rich as Oprah. –as of 2010. However, Forbes said that he only had a billion dollars and knowledgeable people believe that he’s far more wealthy than that. Others suggest that the 5’6″ narcotics kingpin is the single most powerful man in Mexico.
The Sinaloa Federation Cartel smuggles multi-ton cocaine shipments from Colombia through Mexico to the United States, and by other means to Europe, Africa and Asia. His organization has also been involved in the production, smuggling and distribution of Mexican methamphetamine, marijuana, and heroin.
Today Chapo Guzman ponders the fate of Osama bin Laden (OBL) who ended up with a couple of rounds through his brain. OBL has a legacy that will be recalled, but he ended up in a mansion smoking dope, injecting heroin and drinking Coca Cola…hardly an Islamic Icon.
Will the US Government parade Chapo Guzman’s corpse in an undignified way? Will his remains be displayed wearing a red dress with expensive women’s high heels on his feet? Who knows? It hasn’t happened yet.  However, the net closes around Chapo as the world’s most wanted fugitive from justice.